Then it just switched off and wouldn't restart so I then tried to start it up manually but nothing. My PC switches on it seem light's flash, DVD drive opens and closes but nothing on my screen my monitor shows no signal. And the light that indicates my harddrive is in use is dead it's almost asof my hard-drives aren't connected.

I've disconnected everything and put everything back together with no luck and there is no beeping to indicate what the problem it. I'm still quite new to repairing a PC and I would like to know how I could fix this specific issue.

Please can anyone help
Related:
Answer 1 / 1
Best answer
Hello, when you saw the message "Pc ran into problems..." what is/was the stop code at the bottom of the page. 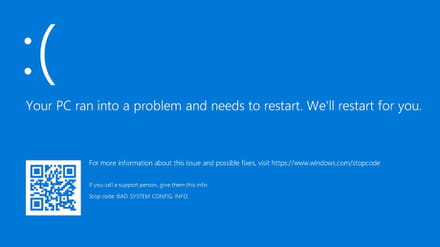 On this site there is a list of other stop codes. If you know your code it could help troubleshoot the issue.

I couldn't see the code. The screen went black and my PC switched off before I had the chance. I've been troubleshooting my PC I've tried the RAM, Unplugging my graphics, sound and Wi-Fi Card and Unplugging my Hard drive hopping it would show no bootable device but nothing it still won't switch on I can't even go into my bios
Join the community!