What is and what does a motherboard do ? The primary component of a computer is the motherboard (sometimes called the mainboard). The motherboard is the hub which is used to connect all of the computer's essential components. As its name suggests, the motherboard acts as a parent board, which takes the form of a large printed circuit with connectors for expansion cards, memory modules, the processor, etc. 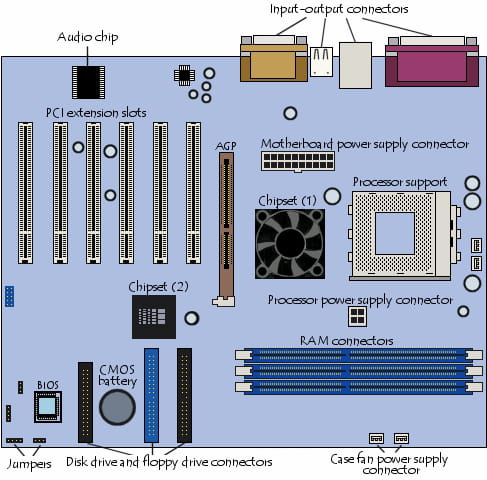 There are several ways in which a computer motherboard can be characterised, in particular the following:

The term form factor is normally used to refer to the motherboard's geometry, dimensions, arrangement, and electrical requirements. In order to build motherboards which can be used in different brands of cases, a few standards have been developed:

The motherboard includes some on-board components, meaning that they are integrated into its printed circuitry: 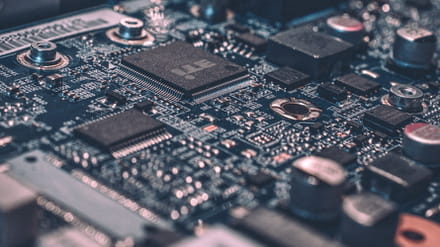 What's more, recent motherboards generally include a number of onboard multimedia and networking devices that can be disabled:

The chipset is an electronic circuit whose job is to coordinate data transfers between the various components of the computer (including the processor and memory). As the chipset is integrated into the motherboard, it is important to choose a motherboard which includes a recent chipset, in order to maximise the computer's upgradeability.

Some chipsets may include a graphics or audio chip, which means that it is not necessary to install a graphics card or sound card. However, it is sometimes advised to disable them (whenever possible) in the BIOS setup and to install high-quality expansion cards in the appropriate slots. 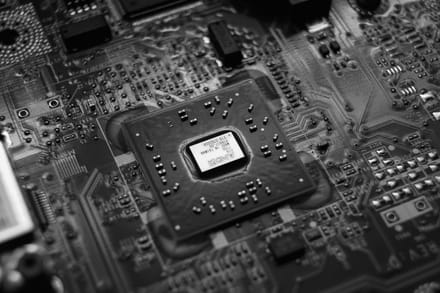 The CMOS clock and battery

The real time clock (RTC) is a circuit which synchronizes system signals. It is made from a crystal which, as it vibrates, gives off pulses (called timer ticks) in order to keep the system elements running on the same time. The timer frequency (expressed in MHz) is the number of times the crystal vibrates each second, i.e. the number of timer ticks per second. The higher the frequency, the more information the system can process.

When the computer is turned off, the power supply stops providing electricity to the motherboard. When the computer is turned on again, the system is still on at the right time. The CMOS saves some system information, such as the time, the system date, and a few essential system settings. But what is CMOS ? CMOS stands for Complementary Metal-Oxyde Semiconductor. It is an electronic circuit, sometimes also called the BIOS CMOS.

The CMOS is kept powered by a battery (a button battery), or a battery located on the motherboard. Information on the hardware installed in the computer (such as the number of tracks or sectors on each hard drive) are stored in the CMOS. As the CMOS is a form of slow storage, certain systems sometimes recopy the CMOS's content into the RAM (fast storage); the term memory shadow is used to describe this process of copying the data into RAM.

The complementary metal-oxide semiconductor is a transistor manufacturing technology, the latest in a long line which includes the TTL (Transistor-transistor-logic), the TTLS (TTL Schottky) (faster), or the NMOS (negative channel) and PMOS (positive channel).

The CMOS allows many complementary channels to run on a single chip. Compared with TTL or TTLS, CMOS is much slower, but it consumes far less energy, which is why it is used in computer clocks, which run on batteries. The term CMOS is sometimes incorrectly used to refer to computer clocks.

When the system time keeps getting reset, or the clock runs late, all that is usually necessary is to change the battery.

The BIOS (Basic Input/Output System) is the basic program used as an interface between the operating system and the motherboard. The Basic Input Output System (BIOS) is stored on a ROM (read-only memory, which can not be rewritten), so it uses data contained within the CMOS to find out what the system's hardware configuration is.

The BIOS can be configured using an interface (named the BIOS setup), which can be accessed when the computer is booting just by pressing a key (usually the DEL key. In reality, the BIOS setup is only used as an interface for configuration; the data is stored in the CMOS. For more information, check your motherboard's manual.)

The processor (also called the microprocessor) is the computer's brain. It runs programs using a set of instructions. The processor is characterised by its frequency - the rate at which it executes instructions. This means that an 800 MHz processor can carry out 800 million operations per second.

Within these two large families, there are different versions used, depending on the type of processor. Whatever slot or socket is used, it is essential that the processor be inserted gently, so that none of its pins are bent (it has hundreds of them). To make inserting them easier, a concept called ZIF (Zero Insertion Force) has been created. ZIF sockets have a small lever that, when lifted, allows the processor to be inserted without applying any pressure, and when lowered, it holds the processor in place.

The processor generally includes some sort of foolproof device, in the form of a notched corner or colored markings, which must be aligned with the corresponding markings on the socket. 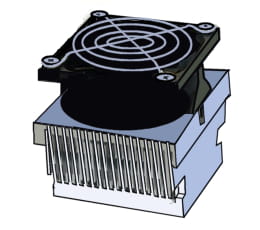 Since the processor releases heat, it is necessary to dissipate it, to keep the circuits from melting. This is why it is generally mounted atop a heat sink (sometimes called a cooler or radiator), which is made of a metal which conducts heat well (copper or aluminium) in order to increase the microprocessor's heat transfer surface. The heat sink includes a base in contact with the processor and fins in order to increase the heat transfer surface. A fan generally accompanies the cooler in order to improve air circulation around it and to improve the heat transfer. The unit also includes a fan which vents hot air from the case and let fresh air come in from outside.

RAM (Random Access Memory) is used to store data while the computer is running; however, its contents are wiped out as soon as the computer is switched off or restarted, as opposed to mass storage devices such as hard drives, which keep information safe even while turned off. This is why RAM is called "volatile."

Why, then, is RAM used at all, when hard drives cost less per byte stored? The answer is that RAM is extremely fast when compared to mass storage devices like hard drives. It has a response time on the order of a few dozen nanoseconds (about 70 for DRAM, 60 for EDO RAM, and 10 for SDRAM; as little as 6 ns for DDR SDRAM) as opposed to a few milliseconds for a hard drive.

RAM comes in the form of modules which plug into motherboard connectors.

Expansion slots are compartments into which expansion cards can be inserted. These are cards that give the computer new features or increased performance. There are several types of slots:

The motherboard has a certain number of input/output sockets found on the rear panel.

Most motherboards have the following connectors:

Related
This document, titled « Motherboard », is available under the Creative Commons license. Any copy, reuse, or modification of the content should be sufficiently credited to CCM (ccm.net).
Previous