one of the best programming and text editing tools on the market! It supports all major programming languages and offers color coding feature!

Notepad++ is a free open source editor that manages various types of code (Pascal, C, C ++, Ada, Java, Perl, etc.). It can also be used as a powerful text editor. Notepad ++ is written in C ++ and uses the win32 and STL API, achieving greater speed. It allows you to have several documents open at the same time. This is the Notepad++ download page. 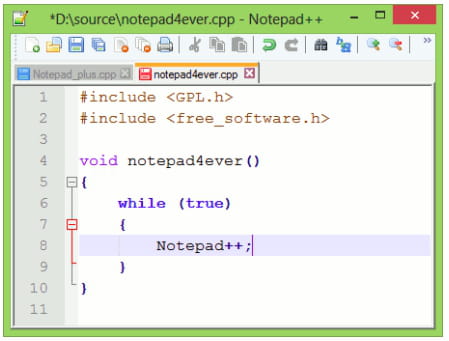 How to install Notepad++?

To install Notepad++ simply download the program, and follow the installation wizards instructions by clicking on Next.

How does Notepad++ work?

Notepad++ works as a user-friendly text and code editor, where you can write in the programming language of your choice. It has an Autosave option that ensures that your work will not be lost.

Notepad Plus Plus is completely free of charge, though you can make a donation to its developers.

OS: Windows 7 and later. Photo – notepad-plus-plus.org
Share
Related
Alternative spelling: npp.7.9.5.Installer.exe
Latest update on May 4, 2021 at 07:53 AM by Natalia Kudryavtseva .
View all 11 comments