This good selection of drivers is included in the more recent versions of Windows.

Disclaimer: the versions after DirextX 11 are included in Windows 8/Server 2016/10 and there are no stand-alone packages. Every DirectX update is available through Windows Update.

What is DirectX? DirectX is a selection of application programming interfaces provided by Microsoft and integrating numerous multimedia and namely graphical functions/effects (3D, smoke, lights, etc.) especially related to video games. The letter “X” is a replacement for all the other APIs that used to start with “Direct” (for example, Direct3D, DirectDraw, or DirectMusic). On this DirectX download page, we discuss some of the APIs’ key features, as well as some additional information. 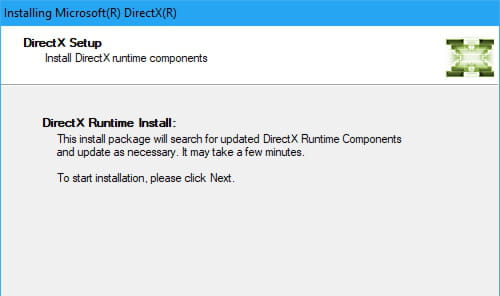 Here are some of the main features of DirectX (12):

How to install DirectX?

During the installation process, uncheck the "install the Bing toolbar" option.

Important : The downloaded file checks on your operating system (Windows 7, 8, Vista or XP, 32 / 64bits) and downloads the appropriate version:

Yes, Microsoft DirectX is safe - it is even required for some video games.

Yes, the DirectX collection of APIs is free. This is also the case of the related updates.