NBA JAM by EA SPORTS(TM)
Download
Download Commercial
iPhone - English
NBA JAM published by EA SPORTS(TM) and developed by EA Canada is basketball video game with three modes of play. The gamer just have to select which one he wants. This version for iOS is released in November 2010 offering mobile phone owners the ability to play the game. Visual style and 3D models are high-resolution. 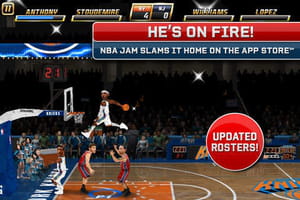