An absolute must for the commute to work or chilled out weekends. The content library is huge and diverse, especially compared to some other platforms.

Amazon Prime Video is an app designed to give you on-the-go access to Amazon's video streaming service from your mobile device. It was developed by Amazon Mobile LLC and is designed for Android and Apple devices. With over one hundred million installs on Android and ranking #6 on the App Store, it is one of the most famous streaming apps in the world. In this article, we discuss some of the app’s key features, as well as some additional information. 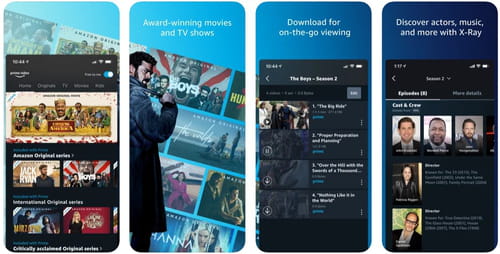 Here are some of Amazon Prime Video’s main features:

How Does Amazon Prime Video Work?

The mobile version of the service looks very similar to the desktop version but also to other streaming services, which makes the navigation pretty intuitive. You also have parental control options.

It seems that the app has no history of security issues or abusive data collecting. As always, we recommend reading the official Privacy policy in order to take note of the way the Amazon Prime Video app uses your data, namely to third-party apps. In general, the app seems as safe as any other streaming service.

The Amazon Prime Video app is free. However, you still need to pay a subscription to access the catalog.

The required Android version to run the app varies with devices. For the Apple version, you need iOS/iPadOS 12.1 and later or Apple TV 11.1 and later.
Images: App store