The portal mechanic and fast-paced fps shooter combination make the game very pleasant and exciting. Even though it's not a AAA production, you will have lots of good time playing with your friends and other players. Moreover, it has lots of different game modes.

Splitgate for PC is a free-to-play and fast-paced multiplayer shooter that features portals controlled by players delivering multi-dimensional and high-flying combats where innovative and clever strategies will emerge. 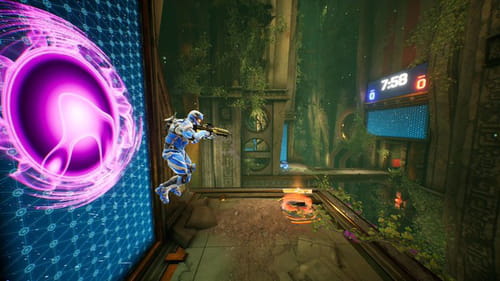 Splitgate features beautiful sci-fi graphics in rich and beautiful environments. The sound and the audio feedback are also coherent with the gameplay to make you feel an immersive and pleasurable experience.

Splitgate offers a fast-paced multiplayer experience you will enjoy during dozens of hours in over 15 different game modes:

Splitgate for PC is rated 69/100 on Metacritic.

The gameplay underneath all the standard trappings is impressively solid.
(Game Revolution)

Splitgate for PC is rated PEGI 16 as it contains strong violence.