Batch DOC TO DOCX Converter
Download
Download Shareware (1.52 MB)
Windows XP Windows Vista Windows 2000 Windows 7 Windows 8 - English
Since Microsoft has released its office suite Microsoft Office 2007, a huge issue of compatibility has been reported from everywhere. Indeed, the former version can't read the files created by the latter one and using program like Batch DOC and DOCX Converter is a solution. 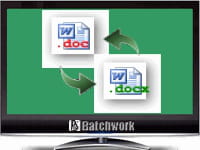 As its name points it out, Batch DOC and DOCX Converter's purpose is to convert file created with Microsoft word 2003 into Microsoft word 2007 format and vice versa. This will tackle compatibility issues between these programs. You can import your files upon Batch DOC and DOCX Converter's interface with a simple drag and drop operation. And to make its use easier, a built-in search module was designed to find files quickly. Of course, batch processing is supported given the software's name. You can process to the conversion of several files at once, provided their output directories are all the same. Once finished, your work is automatically saved for afterward use.

A command line is also included in the software. It is easy to use.

This is a trial version that can be used for 7 days.