Download Emule (EN)
Emule is an open-source P2P clients. It was designed to share files between users. That is to say that one user can download files from another user hard drive and vice versa. 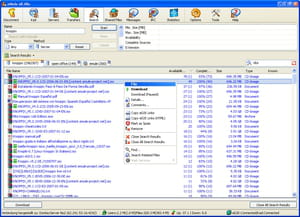 Sharing: Emule is mainly designed to download files in another user's hard drives located anywhere else in the word. For that, the program needs to be installed on both computers and the transfer is made via Internet connection.

Control: on its interface, the software displays the rate of progress of each downloaded files. It allows prioritizing files by setting the bandwidth connectivity. It also has a resume option that avoids any download errors.

Safety: the advantage with Emule is that it detects and blocks existing spyware and adware. In addition to that, it checks each file after the download process to detect and avoid any malicious items.

Discussing: one of the particularities of this software is its ability to send message to another user located anywhere in the world. Thanks to its integrated IRC, all users are able to communicate and share documents between them.

It is a P2P software, that is to say that other users can download files from one's hard drive.

Emule has an automatic correction of corrupted files.

This version of the software does not include a help option.
Share