What is BIGO LIVE? BIGO LIVE is a live video streaming social media platform that connects millions of users across more than 150 countries across the globe. It allows you to live-stream your talent — singing, dancing, traveling, and playing games — and chat with your friends. In this article, we discuss some of the app’s key features, as well as some additional information. 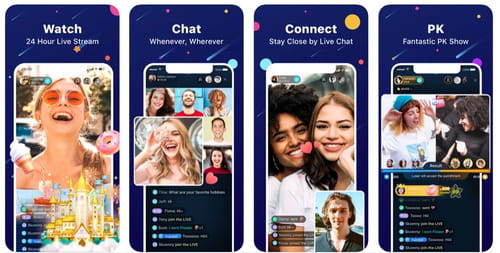 Here are some of the main features of the BIGO LIVE app:

Is BIGO LIVE a dating app?

No, BIGO LIVE is not a dating app. Its features are not similar to those of dating apps.

When it comes to safety, you should know that the app is rated as unsuitable for children. Depending on where you live, that might mean that you need to be at least 16/18/21 years old.

Another negative point is the payment security - many streamers have reported difficulty getting paid.

You can enjoy this app for free. However, it also contains some optional in-app purchases.

For the BIGO LIVE download for Android click on the green button at the top of the page. The app is also available for Apple devices.

In order to run this app on your device, you need Android 4.4 and up or iOS and iPadOS 9.0 and later.
Images: App Store