PUBG: Battlegrounds, previously known as simply PUBG and also known as PLAYERUNKNOWN'S BATTLEGROUNDS, is the forerunner of other modern battle royale games such as Fortnite and Free Fire. Be ready for epic battles and take down all your opponents one by one.

PUBG: BATTLEGROUNDS first appeared as a mod of Arma 3 back in 2015, it then slowly gained popularity until it became an independent video game in 2017. The concept of PUBG is simple, yet dangerously addictive. At the beginning of each PUBG game, a total of 100 players are parachuted into a deserted island from a plane. Players initially find themselves empty-handed, and the first thing on their minds is to collect as many guns, ammunition, and objects as possible to get ready for battle. This is where havoc starts. The ultimate goal is to kill everyone else on the island and become the last man standing. 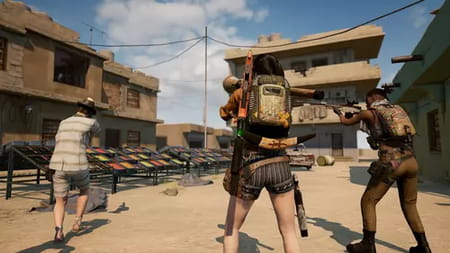 This game boasts outstanding graphics quality, despite not usually being one of the strong points in battle royale video games. The audio also contributes to offering a realistic and immersive gaming experience, being able to hear the direction of the enemy's footsteps or the origin of a gunshot. We strongly recommend you to play with a gaming headset to take full advantage of the sound effects.

PUBG: Battlegrounds is an online multiplayer game that, apart from the classic solo free-for-all mode, allows you to play in pairs (Duo) or as a team (Squad) in different modes, such as Arcade, Zombies and 8v8 Team Deathmatch. The duration of a typical PUBG match ranges between 10 and 35 minutes.

PUBG: Battlegrounds for PC has been rated 86/100 on Metacritic.

"PUBG has managed to create experiences you can't find anywhere else (or at least, you couldn't). It needs to improve some aspects and polish some things to become a legend, but the foundations are already very, very good." (Vandal)

The game is rated PEGI 16, due to frequent moderate violence towards human characters and encouragement of drug use.

Until recently, PUBG: Battlegrounds for PC was only available for purchase. However, from January 12, 2022, the game has become free-to-play for everyone. Players who have purchased a copy of the game before the F2P transition will automatically receive the PUBG: Special Commemorative Pack, including a free Battlegrounds Plus upgrade and several in-game rewards.

For some players, the answer is yes, for others the answer is no. If you are playing on an Xbox or PlayStation, then cross-platform play is a possibility between these consoles. Unfortunately, crossplay is not an option for users on a PC or mobile device, and KRAFTON doesn't seem to have plans to facilitate this any time soon.