One of the most epic games of all time with a fantastic storyline and settings!

Outriders is the new 1 to 3 people cooperative shooter game happening in a world of total despair and darkness – a distant Earth-like planet Enoch. You are sent to the most dangerous planet to save humanity and fight other species while looking for a mysterious signal and getting away from Anomaly. The game was released on April, 1st 2021 by the developer People Can Fly. You can download Outriders demo version by clicking on the green button. 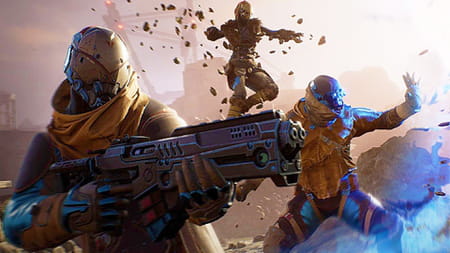 Outriders should take around 25-30 hours of gaming. It offers two game modes: single-player mode and multiplayer mode limited to cooperative play. In multiplayer mode, you and two other players can form a party and fight against enemies together.

What do reviews say about Outriders?

The average Metacritic rating of the game is 73.

Outriders isn’t revolutionary, and it’s not trying to be. Outriders is a well-thought-out shooter with expertly tailored RPG twists. It's an enjoyable ride that is made infinitely better by playing with friends but not inherently hurt by running solo either. This game takes the best parts from other looter-shooters and the best aspects of sci-fi RPGs and blends these elements into an experience that is worth diving into because of its high replayability, customizable play style, and fun story. I'm already strapping in for another run”,- says Game Informer about Outriders.

Outriders has a PEGI rating of 18 due to brutal and violent scenes and the use of strong language.

The Outriders game costs $59.99 (at the time of writing this article).

Yes, Outriders fully supports crossplay, which means that you can easily team up with one or two other players and create a gang.

You can watch the Outriders trailer to view more of its gameplay.

You can play Outriders on Microsoft Windows, PlayStation 4, PlayStation 5, Xbox One, Xbox Series X/S, and Stadia.