Simple and easy software for all those who want to do computer partitioning.

In order to partition a hard drive, generally, the system reinstallation is the only solution to achieve it. Today, computer partitioning becomes easier thanks to programs like Parted Magic Live CD. To perform such task with Parted Magic, the user simply inserts the CD into the drive, and he can modify Mac OS partition, Linux and Windows easily. It gives him the ability to move, copy, create, delete, increase and decrease partitions. This software uses the functions of G-Parted and Parted to handle partition tasks. Thus, a collection of system files is included in Parted Magic so as it supports various formats such as HFS, HFS +, EXT2, FAT32, FAT16, Linux-swap, REISERFS, NTFS, Reiser4, and XFS.

Apart from the feature mentioned above, this software also scans the computer. For example, it performs a test of hard drives and RAM, analyzes the performance of the computer, erases data, accesses systems that do not start and recovers important data.

Being a Live CD, Parted Magic does not require any installation to work. The user has just to burn the ISO format in a CD and insert it into the drive and it automatically starts. 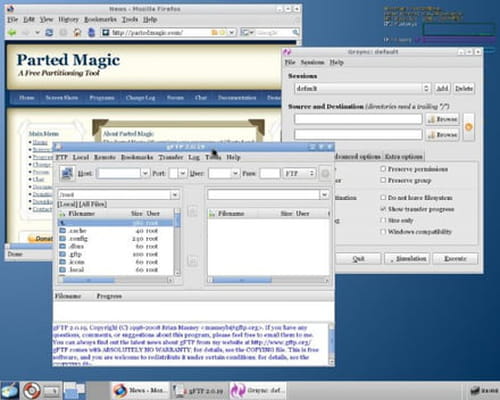 Its use requires a certain skill in computing in order to avoid potential damages to hard disks.
Share

Main Points it is bootable