Every computer is built with tons of different ports that perform various functions. Two of the most important types for data trans are serial ports and parallel ports. This article discusses the differences and similarities between the two types of port. 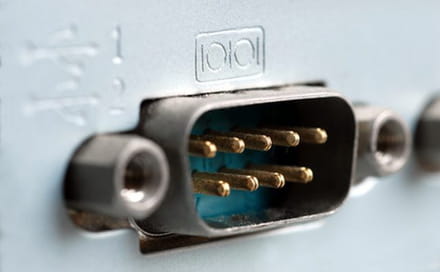 A personal computer generally has between one and four serial ports.

The first two-way parallel ports allowed for speeds of 2.4Mb/s. Enhanced parallel ports have been developed however to achieve higher speeds — the EPP (Enhanced Parallel Port) achieves speeds of 8 to 16 Mbps, and the ECP (Enhanced Capabilities Port), developed by Hewlett Packard and Microsoft has the same characteristics as the EPP, with a Plug and Play feature, allowing the computer to recognise the connected peripherals.

Parallel ports, like serial ports, are built into the motherboard. DB25 connectors allow for connection to an exterior element (e.g. a printer):

Related
This document, titled « Serial Port and Parallel port », is available under the Creative Commons license. Any copy, reuse, or modification of the content should be sufficiently credited to CCM (ccm.net).
Previous