Download Hill Climb Racing for Android (EN)
Hill Climb Racing a racing video game mainly based on physics. The player enters the character of Newton Bill who is keen on uphill racing and is quite a bit lunatic and imprudent. He has to conquer the highest hills and to respect the laws of physics. This game is published and developed by Fingersoft. It can work on Android tablets and mobile phones. 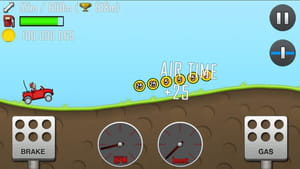