The GANTT diagram is a tool that allows the user to model the planning of tasks necessary to the performance of a project. It is named after its inventor Henry Gantt who created it more than 100 years ago, in 1917. Given the relative ease of reading of GANTT diagrams, this tool is used by almost all project managers in all sectors to control and manage the workflow, project stages and progress representation in real time. In this article, we will walk you through this essential management tool and explain how to work with it. 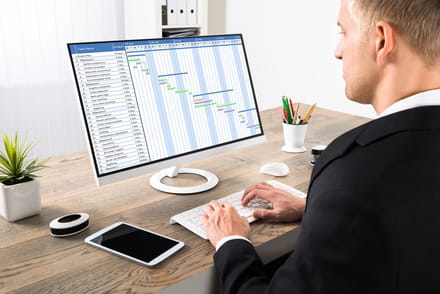 The GANTT diagram is a tool for the project manager, which allows for the graphic representation of the progress of the project, but it is also a good means of communication amongst the various persons involved in a project. This type of modeling is particularly easy to implement with a simple spreadsheet (you can create GANTT charts in Excel, for example), but there are also specialized tools, specially designed for project management means, such as GANTT Project.

In a GANTT diagram, each task is represented by a line, while the columns represent the days, weeks, or months of the schedule depending on the duration of the project. The estimated time for a task is modeled by a horizontal axis, the left end of which is positioned on the intended start date and the right end of which is on the intended end date. Tasks can be placed in sequential chains or carried out simultaneously. 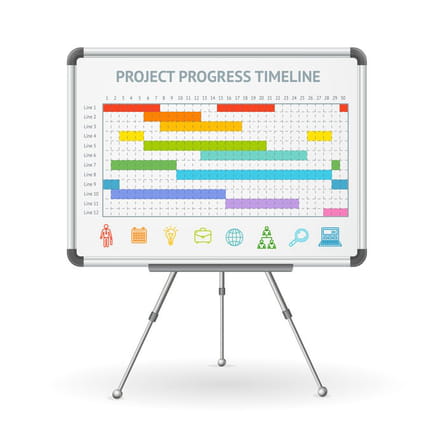 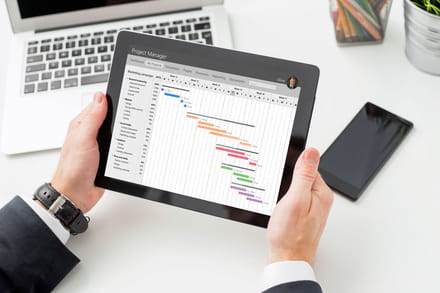 As a task progresses, the bar that represents it is filled proportionally to its degree of completion. Thus, it is possible to get a quick overview of the progress of the project by tracing a vertical line across the tasks at the level of the current date. The completed tasks are located to the left of this line; tasks that have not yet begun are at the right, while the tasks being carried out are crossed by the line. If their filling is located to the left of the line, it means that the task is in delay compared to the plan.

Ideally, such a diagram should not have more than 15 or 20 tasks so that it can fit on a single A4 page. If the number of tasks is greater, it is possible to create additional diagrams detailing the planning of the main tasks.

Additionally, it is possible to have the major events other than the tasks themselves show on the plan as points of connection for the project: these are the milestones.

The milestones allow the project to be decided in clearly identifiable phases, which avoids the end of the project being too far off (this is often referred to as the "tunnel effect", a project with a long duration and no intermediate endpoint). A milestone could be the production of a document, the holding of a meeting, or a deliverable of the project. The milestones are tasks of zero duration, represented on the diagram by a specific symbol, most frequently a reverse triangle or a diamond. 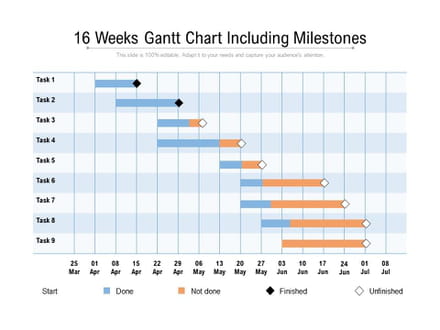 It is generally possible (and useful) to show resources, human or material, on the diagram, in order to allow for estimation of needs and give an idea of global cost.

For the sake of concision, the initials or the names of those responsible for each task will sometimes suffice.

Related
This document, titled « What Is GANTT Diagram? », is available under the Creative Commons license. Any copy, reuse, or modification of the content should be sufficiently credited to CCM (ccm.net).
Previous

Stages of the project

Stages of the project
Validation