Grand Theft Auto: San Andreas is an action-adventure video game published in 2004 by Rockstar Games. Despite the time since its release, this game retains a lot of fans who continue to play its different versions for gaming consoles, computers, or mobile devices.During the game you can activate different tricks that will help you complete the missions or make them much more fun. The San Andreas GTA tricks for PC presented below must be introduced during the course of the game. 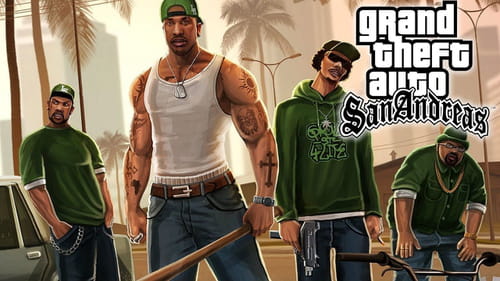 MROEMZH: You find gansters everywhere.
MROEMZH: The gangsters control the city.
BIFBUZZ: Gansters are the masters of the street.
ONLYHOMIESALLOWED: The gangsters are everywhere.
YLTEICZ: Aggressive drivers.
LLQPFBN: Pink traffic.
IOWDLAC: Black traffic.
AFSNMSMW: Flying boats.
BGLUAWML: Pedestrians attack you with weapons and launch missiles.
FOOOXFT: Everyone is armed.
BLUESUEDESHOES: Elvis is the king and that is why he's everywhere.
ASBHGRB: Elvis is everywhere.
GOODBYECRUELWORLD: Suicide.

Related
This document, titled « Cheats and Codes for GTA: San Andreas », is available under the Creative Commons license. Any copy, reuse, or modification of the content should be sufficiently credited to CCM (ccm.net).
Previous