Of all the electronic components that make up a computer, the graphics card is an indispensable device for the visual experience. It is an integrated circuit that takes care of data processing and transformation into visible information, that is revealed to the user through a monitor, television, projector, etc. In this article, we will explain to you the different types of graphic cards, their components and their main features and will show how to choose the right one for you. 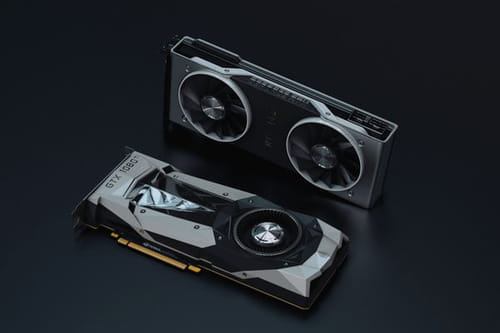 In the case of integrated graphics cards, the GPU (graphics processing unit) does not use the RAM of the card itself, but uses the VRAM (Video Memory) of your computer. They are also integrated in the same chip as the CPU (your computer's processor). This option is the cheapest and can be suitable for non-graphics intensive activities.

Dedicated cards have their own independent source of memory. Therefore they are kept outside of your computer's RAM, ensuring better performance. It should be taken into account that they consume more energy, so it is recommended to have a good cooling system. They guarantee a better visual experience in the most demanding games or graphic design programs. We can find them in two formats: with a direct connection to a motherboard port or in MX format for laptops.

Graphics Cards for Desktops and Laptops

Components of a Graphics Card

Below are the elements that make up a graphics card and its features:

This term refers to the graphics core, that is, the brain of our card and where all the necessary operations are carried out. The GPU accelerates the performance of the different applications related to image processing. 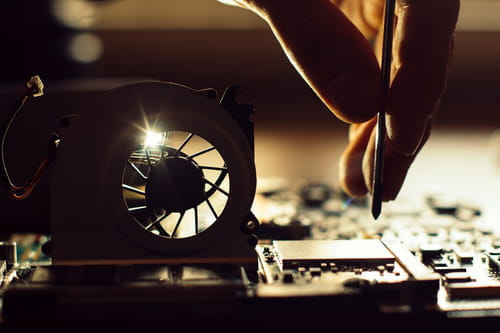 Here are the specifications of this component that will determine to a greater extent the quality of our graphics card. These are:

It is measured in MHz or GHz (GB being a unit of measurement greater than MB) and indicates the speed at which the cores in a graphics card operate. This is one of the most important variables to determine the performance of a card. The higher the clock frequency, the faster the data processing. Low-end cards are around 825MHz. and high-end cards can exceed 1200MHz. Two types of frequencies are usually specified: Base Clock (processor base frequency) and Boost Clock (the frequency that reaches within temperature and power consumption limits).

They are called CUDA cores (on NVIDIA cards) and stream processors (on AMD cards) and are mainly responsible for texture rasterization and object geometry. These are the most important elements of the power of our graphics card because the more shaders there are, the more power there will be. A low range model will have around 192 cores, being able to reach 3594 cores in the most powerful models.

Number of pipelines
In charge of changing vertices and lines to pixels when moving from 3D to 2D images.

It is a subprocessor that takes care of the transcription in memory of the pixels and therefore of the texture. For example, this directly affects the FPS (Frames Per Second) in a video game.

The so-called random access graphics memory consists of a special integrated RAM memory that allows storing the data concerning the graphics when requested and thus avoid saturating the main RAM memory of our computer. As we have mentioned before, dedicated cards have their own RAM memory.

Being less determinant in the performance of our card than those of the GPU, the quality of the GRAM is subject to different factors:

It is measured in GB or MB. The higher the capacity, the less time it takes to process the data. That can be 4GB, 6GB... and even 16GB, if we refer to the high-end models.

The interface or data bus
It is measured in bits and refers to the number of data that can be sent or received per unit of time. For example, if we have a 128-bit bus, it is capable of sending and receiving up to 128 bits per clock cycle.

The more bits, the more data can be transferred. There are different types, such as PCI Express (Peripheral Component Interconnect Express). These are slots that allow communication between the device and the motherboard of the computer. Their size is indicated by an x, usually preceded by a number (e.g. x16), which reflects the slot size. To clarify, the higher the value of the number, the larger the size.

Speed
It is measured in MHz or GHz (effective frequency). It is complementary to the data bus, since it determines the data transfer speed.

Bandwidth
It is usually measured in GB/s and is the result of the combination of the two previous variables: it is the product of the memory interface (bits) by the effective frequency of the speed divided by 8:

Following this example, PCI graphics have a 32-bit data bus, a frequency of 33MH and a bandwidth of 132 Mb/s.

Regarding the development of the different types of GRAMs used in the cards, the GDDR3 version launched by Samsung in 2003 has been followed by GDDR4(2005), GDDR5(2008), GDDR5X(2016) and GDDR6(2018). At least, these are the most popular ones, they were the best rated in their release date and in this article they have been ordered from lower to a higher speed. In this regard, it is also worth mentioning the HBM memory used in very high-end models.

As its name indicates, the Digital-to-Analog Random Access Memory converter’s function is to convert a digital signal that allows the output device to interpret the data.

On the other hand, it directly affects the screen refresh. It is usually measured in MHz and the higher it is, the more it can support different monitor refresh rates.

Today, the vast majority of monitors support digital images. For this reason, they are increasingly in disuse. 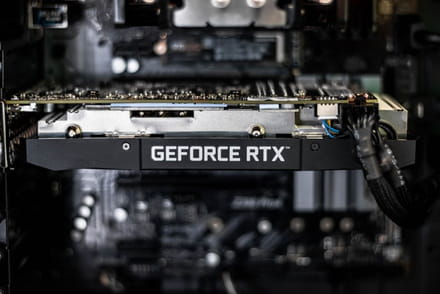 The most commonly known outputs to make the connection between the graphics card and the monitor are the VGA output (to carry an analog image), DVI (for digital displays and replacement of the previous one) and HDMI or DisplayPort (digital image transmission technologies that also have the ability to transmit high definition videos and audios at high speeds).

It follows from the above descriptions that we recommend purchasing the latter option.

Interfaces with the Motherboard

This section refers to the connection systems between the graphics card and the motherboard of your computer. In the same way that it happens in the GRAM, they determine the relationship between the bus architecture, the frequency and the necessary bandwidth in a set time.

These devices include heatsinks and fans, which are extremely important to prevent overheating that could cause damage to the graphics card.

The heatsink is a passive silent device (no moving parts) that helps to extract heat. The larger the surface area, the greater the cooling capacity.

Fans are active devices, therefore noisier, which move the air near the card. They are less efficient than heatsinks, so we recommend having both.

There are also alternatives that use water as a cooling element (watercooling) instead of air.

Last but not least, we are going to talk about the power supply of the graphic cards, devices that consume a lot of energy. Therefore, it is important that they do not exceed the power supplied from the PCIe port (bus that allows adding expansion cards to the computer) of the motherboard, which has 75W.

If a higher consumption is required, it is also possible to avoid connecting the card directly to that port and do it to a power source by means of a specific connector.

Once all the components have been analyzed, it is important to take into account the balance between them for proper functioning. For example, it is not enough to have a card with great capacity if we have a reduced bandwidth.

Sometimes, when trying to find information about graphics cards on the web, if you do not have extensive knowledge of computers and some terms can generate confusion among users.

First of all, we can find that this device receives several names: video card, video board, display adapter and graphics accelerator card. When we talk about this component, it is usual to refer to the GPU (component described above). In many occasions, this term is confused with the graphics card itself. As we have said, the GPU refers to the graphics core of the card, but this is not the only component.

We can find the terms iGPU and dGPU that refer to both types of graphics cards: integrated or dedicated.

Related
This document, titled « How to choose the right graphics card », is available under the Creative Commons license. Any copy, reuse, or modification of the content should be sufficiently credited to CCM (ccm.net).
Previous