A screenshot, or the Print Screen function, is used to capture the display currently on your monitor. Most computers allow you to capture the image on the screen fairly easily. This tutorial will walk you through how to take a screenshot on Windows, macOS, and UNIX/Linux computers, as well as on your iPhone, iPad, and Android phone. 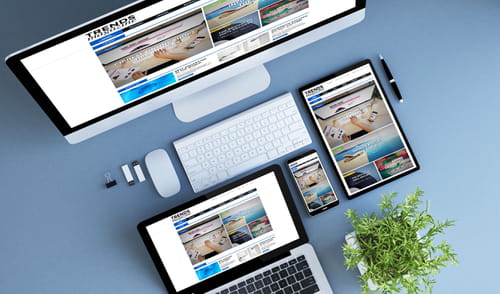 Take a Screenshot on Windows

On Windows, the command key used to perform the function is usually found in the upper-righthand corner of the keyboard and is called some variation of Print Screen. Once the display that you want to capture is on your screen, press this key once. This will take a screenshot of the entire screen.

Open the graphic editing program of your choice (like Paint, for example), and, either using the command [Ctrl] + [V], or the program's manual options, paste the image in the provided space. You can, then, edit it to your liking or simply save it.

Screenhsot of the Entire Desktop 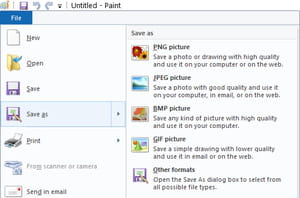 Use [Windows key] + [Print Screen] to capture a quick screenshot of your entire screen. This key combo will instantly create a file for each of your screenshots in C:\Users\Username\Pictures\Screenshots.

In a Specific App Window

Click the title bar of the desired app, which will bring the app to the front, and press [Alt] + [Print Screen] to capture the active window. Use a program, such as Paint, to retrieve the screenshot from the clipboard.

In a Specific Area of Your Screen

Click New, then drag your cursor over the area of your screen you want to capture. Edit and save the screenshot.

With the Xbox App

The Xbox app that comes pre-installed in Windows 10 allows you to take screenshots and record video clips of your favorite apps and games.

Open the Xbox app, then minimize it, allowing it to run in the background. Next, open the desired app, press [Windows key] + [G] to open the Xbox app Game Bar, then click Yes, this is a game to add the app to your game list. (Don’t worry, you only have to perform this operation once.)

Use the Camera button in the Game Bar, or press [Windows key] + [Alt] + [Print Screen], to capture screenshots:

You can view your screenshots directly in the Xbox app (Game DVR > This PC) or by going to C:\Users\Username\Videos\Captures.

On a Windows 10 Tablet/Touch Screen Device

Use the command [Windows key] + [Volume Down] to capture your screenshots.

Take a Screenshot on iPhone/iPad

To take a screenshot on iOS devices, you simply need to press the power button at the same time as the home button. You can find your screenshot in your Camera Roll.

Take a Screenshot on Android

The process to create a screenshot on Android depends on the version that you have. For Android 4.0, 4.1, and 4.2, you need to push the power button and the volume down button at the same time. Your image will be saved in your gallery.

For Android 2.2 (Fro-Yo), you need to simultaneously press the back button and the power button.

For Android 2.3 (Gingerbread), you need to press the home button and the power button.

For Android 3 (Honeycomb), you will need to root the device.

Take a Screenshot on a Samsung Galaxy

If you are using a Galaxy S5, there's an additional method. Head to Settings, select Motions and gestures, select Capture screen, and enable the Capture screen feature.

You will, now, be able to take screenshots by swiping your finger over the screen from one side to the other. The screenshots are automatically saved in the Screenshots folder of your photo album.

Take a Screenshot on a Samsung Note

If you're using a Note, press the S-Pen stylus button, and a small circular menu will be displayed on your screen. Tap Screen write to take a screenshot of your current screen: 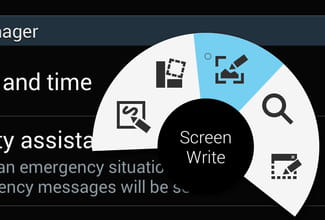 Take a Screenshot on Nexus

If you are using a Nexus 7 and 9, simultaneously press the ON/OFF and volume buttons to take a screenshot.

Take a Screenshot on Mac

On macOS, you can take a screenshot of your entire screen or just a portion of it.

To capture the entire screen, press [⌘] + [Shift] + [3]. The captured image will be saved to your desktop.

To capture a selected portion of your screen, first press [⌘] + [Shift] + [4]. Upon releasing the keys, your mouse cursor should change into a + symbol. You can, now, use the tool to choose what you want to capture by clicking and dragging to create a box around the desired section of the screen. The captured image will be saved to your desktop.

You can, now, make all the desired changes in your graphic editing program (like Preview, for example), including cropping, size and color changes, text and graphics additions, etc.

Take a Screenshot on Linux

For Linux/UNIX, pressing the Print Screen key will capture the whole screen, while using the command [Print Screen] + [Alt] will capture the section of the screen where the mouse is pointing. This will be followed by the appearance of a Save Screenshot dialogue.

There are also quick and effective programs that allow you to capture your screen and edit the resulting image. The biggest advantage of using these is that they make it easy to perform screen captures that require scrolling down.

Some of the best ones are Snagit, TinyTake, and Apowersoft's Free Online Screen Capture.

Related
This document, titled « How To Take a Screenshot », is available under the Creative Commons license. Any copy, reuse, or modification of the content should be sufficiently credited to CCM (ccm.net).
Previous

How to Screenshot on Mac

Clonezilla - Clone your system
How to Screenshot on Mac