After the progress in image quality and the emergence of Full HD and 1080p many users found it hard to imagine that something better would come along, but it did: 4K technology, which makes playing games and watching movies on PCs comparable to looking out the window and seeing and feeling the live-action. In this article, we will tell you what do you need to play games and watch 4K movies on your PC. 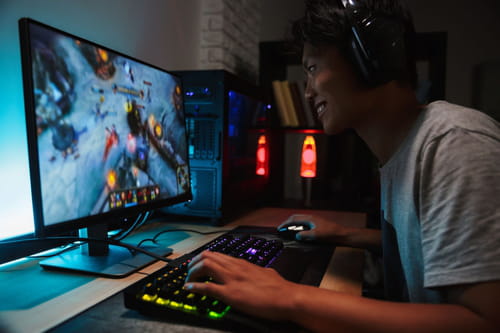 The best way to enjoy 4K quality is to have one or two good graphics cards, always high-end. This way, your PC will be able to process huge amounts of information at full speed, allowing it to process the incredible image quality offered by 4K.

The importance of having a good graphics card to play games and watch movies in 4K reaches a point that if you don’t, your computer will slow down and ultimately you’ll prefer to sacrifice the image quality to regain speed.

In general, 4K works better on PCs than on laptops because of the type of screen they use. If you are thinking of buying a laptop to play games, take a look at the Dell Alienware 17 R5, although keep in mind that ultimately the key element is the graphics card. However, you should note that the 4K experience is optimal only on screens larger than 20 inches, whether desktop or laptop.

There are different ways to rate and combine graphics cards. Some users recommend twin cards in Crossfire or SLI configurations.

Below you have 5 cards recommended for 4K:

GTX Titan XP (Nvidia): This 12GB GDDR5X card is currently the 'Ferrari' of the graphics card market, both for its power and its price: $1,200 dollars.

GTX 1080 (Nvidia): This is the lower version of the previous model, although there is a variant called GTX 1080 Ti that offers a bit more speed. In any case, it is an optimal graphic card for playing games and watching 4K movies. Its price also makes this purchase worthwhile: between $550 and $700.

Vega 64 (AMD): This graphics card gives excellent results in 4K quality (much better than the Vega 56) and its price is around $580 dollars, so it is also a more affordable and complete option at the same time.

RX 5700 XT (Radeon): This card with a Vega 10 graphics core is one of the best options in terms of quality and price, both for its performance and for the features it offers for about $400.

RTX 2080 Super (GeForce): This graphics card offers great stability at 60 FPS in both the first 4K games and the latest titles on the market. It is the best option for those who are looking for a high-end card but without going too far in price: this card costs about $780.

It is not so important to have a device that is new (for example, it’s fine if you have an Intel Core i5 or i7), neither the speed of your microprocessor (CPU) nor your RAM play a significantly large role in the execution of 4K, despite what many people think. In addition to the graphics card, there's another essential element in getting the most out of the image quality that 4K technology offers: the monitor or screen.

The selection of 4K monitors on the market is enormous. When deciding which one to buy, you should have a relevant budget and pay attention to its update speed and its synchronization technology.

You should also consider the size of the monitor because if it's too small you won't notice the details, but if it's too big or has an unconventional shape, you might have problems of scale when playing. Try to keep your monitor no smaller than 20 inches, and if you can afford more, 27 inches or more is perfect.

This is one of the technological truths most ignored by millions of users around the world: most HDMI connections are not 4K. Only the HDMI 1.4 version supports 4K and does so at only 30 frames per second (FPS).

60Hz 4K displays require HDMI 2.0 for optimal performance. An alternative is the DisplayPort 1.3 and 1.4 ports, which can be upgraded to 120Hz frequencies.

Related
This document, titled « How to Play Games and Watch 4K Movies on PC », is available under the Creative Commons license. Any copy, reuse, or modification of the content should be sufficiently credited to CCM (ccm.net).
Previous