For some, Christmas is the most beloved time of the year, not only for the dinners and desserts, but especially because you are in the company of your friends and family, perhaps playing cards or bingo. Unfortunately Covid-19 has messed everything up, and in order to prevent the curve of contagions from rising again, many people will spend the holidays without being able to see their loved ones. If, despite everything, you don't want to give up group games in the company of friends, you can find a solution thanks to your Nintendo Switch. The Nintendo console offers many interesting games to have fun with friends and family, even online. In this article we will show you the most fun Nintendo Switch party games to play this Christmas. 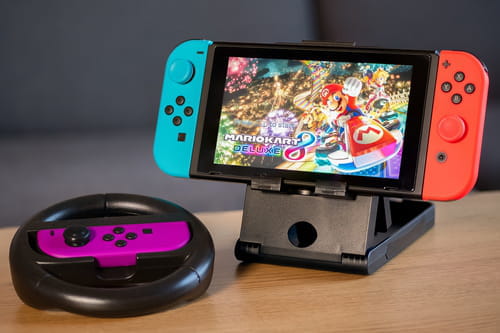 Launched in 2018, Super Mario Party and is one of the most popular party games ever. With more than 80 mini-games to choose from (group, rhythmic, all against all, etc.) and 20 playable characters, the fun is guaranteed. You can play multiplayer up to 8 players both locally and online. Super Mario Party is definitely a must-have for all Switch owners, it’ll give you a lot of pleasant hours challenging friends and family after Christmas lunch.

The holiday season has always been synonymous with card and board games. Games with family or friends, no one escapes Christmas poker. 51 worldwide games brings those classic board games to your Nintendo Switch. Among the 51 games available are:

Like the previous titles, 51 worldwide games also allows you to play with your friends in online or local mode. In addition, if there are multiple Nintendo Switch in the same place, you can activate the mosaic mode, placing the consoles next to each other to compose a larger gaming table.

Board games for Switch: Monopoly

Monopoly is certainly one of the oldest board games. Unlike Hasbro's physical version, this Nintendo Switch party game features three 3D game boards: city (standard), horror and amusement park. You'll be able to play quick games and customize the rules, all to make it more fun. Monopoly lets you play in multiplayer mode with up to 6 players, both locally and online (with your friends or with other players around the globe). If you are a fan of this title, you can't miss having it in your Switch games catalog.

Ask questions, analyze the clues and try to find out who the murderer is. With Clue for Switch you'll be able to turn into the most cunning and intuitive detective. The classic Clue elements are all there: a brutal murder, a large mansion (Tudor Maison), suspicious characters (Miss Scarlett, Colonel Mustard, Countess Peacock, Mr. Green, Dr. Orchid and Professor Plum) and clues to discover the truth hiding behind each character. Like Monopoly, Cluedo has also earned a reputation over the years as a board game classic now available for Nintendo Switch. In this version you'll be able to play up to a maximum of 6 players, locally or online, challenging your friends in private matches. In addition, you'll be able to customize the clue board, as well as the themes (purchased separately).

Known as the game that "ruined more than one friendship," Uno is another holiday classic that needs no introduction. In this Nintendo Switch party game, in addition to the standard mode, there are additional rules that will make every game more fun. These include the ability to throw a +2 and a +4 together (a rule often used arbitrarily in the table version). Challenge your family and friends with the online multiplayer mode, remember to be careful and not ruin relationships because of a +4 (although, the risk is always high!). 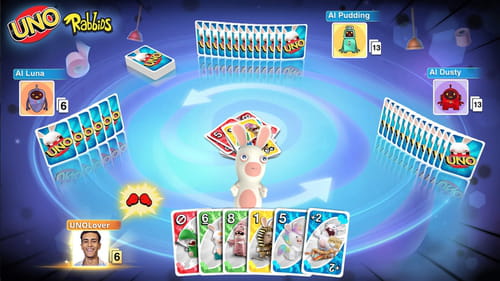 If classic soccer games are boring for you, then Rocket League is the alternative for you. Weird, unpredictable and downright fun, this one mixes spectacular stunts and car racing with 2 or 4 soccer players. Released in 2015, and released for Nintendo Switch two years later, Rocket League allows you to play locally or challenge your friends online in crossplay (that is, even if you own a console other than Switch, such as the Xbox One or PS4). Once you try Rocket League, you won't be able to do without it.

If, on the other hand, you are a lover of crazy go-kart racing, but especially of the Crash Bandicoot saga, you can't miss Crash Team Racing Nitro-Fueled. This remake of the game launched for the first PlayStation back in 1999 has been released 20 years later for the new generations of consoles, including Nintendo Switch. With the Private Match option you'll be able to compete with your friends online, choosing between a Race Mode and Battle Mode. The latter presents different games, such as: Battle with Limits, Capture the Flag, Crystal Hunt, Last Kart and Bacon Thieves. Crash Team Racing Nitro-Fueled is an excellent game to have fun with your friends during the holidays, even if you are far away.

Another round, another (crazy) race. Mario Kart 8 Deluxe is the latest chapter in the beloved Mario Kart saga. It is a must-have title for all Super Mario fans and is full of characters from the Nintendo universe (The Legend of Zelda, Splatoon, Animal Crossing, etc.). With Mario Kart 8 Deluxe you'll be able to play up to 8 players locally and 12 online (in the same lobby). Unlike the previous chapters, it will be possible to communicate with your friends before each match, to increase the healthy and fun competition. Between the very difficult rainbow tracks, extravagant karts, banana peels and other objects you can throw at your opponents, Mario Kart 8 Deluxe is definitely an interesting title that never gets tired.

Just Dance is the dance party game par excellence. Excellent to "digest" the Christmas lunch while having fun in the company of the family. Among the tracks of the new version Just Dance 2021, you can find; All the good girls go to hell by BIllie Eilish, Rain on me by Lady Gaga and Ariana Grande, Without me by Eminem, but also You've got a friend in me, from the Toy Story soundtrack.. The addictive dance moves, the fluorescent graphics are also the trademark of this highly appreciated Ubisoft title. In the local version it will be possible to play up to 4 players. In the online version World Dance Floor you won't be able to choose your dance partners, but you can share your dance moves with other dancers around the world.

Much like Pictionary, Drawful 2 is a simple yet fun board game for Switch. In addition to having a Nintendo Switch you'll have to use your smartphone or tablet to draw what the other players will have to try and guess. To get the points and win, it's not enough to just give the correct answer. The author of the drawing will also reward the player who has given the most original answer. Drawful 2 is only available in English, and although you can play with up to 8 players, you can only play locally. If all this is not a problem, Drawful 2 is a recommended game. The fun is guaranteed.

Related
This document, titled « 10 Party Games for Nintendo Switch To Play This Christmas », is available under the Creative Commons license. Any copy, reuse, or modification of the content should be sufficiently credited to CCM (ccm.net).
Previous

Easy Anti-Cheat What Is It and How Does It Work?

Easy Anti-Cheat What Is It and How Does It Work?
How to Contact Roblox Technical Support?