Windows is the operating system sold by the Seattle-based company Microsoft. Microsoft, originally christened "Traf-O-Data" in 1972, was renamed "Micro-soft" in November 1975, then "Microsoft" on November 26, 1976. Microsoft Windows has over 90% of the Market share for personal computers.

Bill Gates and Paul Allen founded Microsoft on April 4, 1975 in Albuquerque, New Mexico. At that time, Allen was a programmer at Honeywell and Gates was a student at the University of Harvard. They had the idea of developing an implementation of BASIC for Altair 8800 (the first microcomputer) after Allen saw it on the cover of Popular Electronics. After contacting and demonstrating the implementation to Micro Instrumentation and Telemetry Systems (MITS), the manufacturer of Altair, the company agreed to distribute Altair BASIC. This led to both men moving to Albuquerque. The company registered under the name of Micro-soft on November 26, 1976 and had a total of thirteen employees. Later, they had to move to Bellevue, Washington, because they encountered difficulties recruiting programmers in Albuquerque. 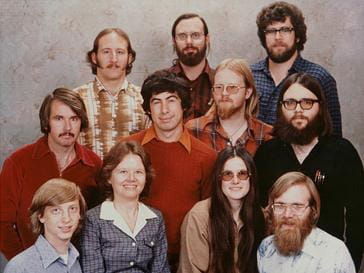 It was on May 22, 1990 that Microsoft Windows became a success, with Windows 3.0, then Windows 3.1 in 1992, and finally Microsoft Windows for Workgroups, later renamed Windows 3.11, which included network capabilities. Windows 3.1 cannot be considered an entirely separate operating system because it was only a graphical user interface running on top of MS-DOS.

On August 24, 1995, Microsoft launched the operating system Microsoft Windows 95. Windows 95 signified Microsoft's willingness to transfer some of MS-DOS's capabilities into Windows, but this new version was based more heavily on 16-bit DOS and retained the limitations of the FAT16 file system, so that it was not possible to use long file names.

Concurrent with these releases, Microsoft had been selling (since 1992) an entirely 32-bit operating system (which therefore was not based on MS-DOS) for professional use, at a time when business primarily used mainframes. It was Windows NT (for Windows "New Technology"). Windows NT was not a new version of Windows 95 or an improvement on it, but an entirely different operating system

In July 1998, Microsoft released Windows NT 4.0 TSE (Terminal Server Emulation), the first Windows system that allowed terminals to be plugged into a server, i.e. use thin clients to open a session on the server.

On February 17, 2000, the next version of NT 4.0 was renamed Windows 2000 (instead of Windows NT 5.0) in order to highlight the unification of "NT" with the "Windows 9x" systems. Windows 2000 is an entirely 32-bit system with characteristics of Windows NT, as well as an improved task manager and full compatibility with USB and FireWire peripherals.

Then, on October 25, 2001, Windows XP arrived on the scene. This was a merger of the preceding operating systems. 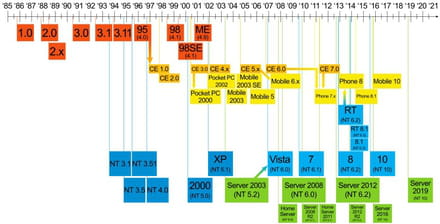 Related
This document, titled « Introduction to Microsoft Windows », is available under the Creative Commons license. Any copy, reuse, or modification of the content should be sufficiently credited to CCM (ccm.net).
Previous