The Heart Machine Studio is composed of people who really care about the game feel, and they definitely know how to make a fine-tuned, beautiful, and challenging game. Solar Ash is going to be a new kind of action-adventure platformer.

Solar Ash, also titled Solar Ash Kingdom during its development, is an upcoming single-player 3D action-adventure platformer developed by Heart Machine and published by Annapurna Interactive. Solar Ash is a third-person perspective game where the huge world, the feel of movement, the flow of combat, and the epic battles against enormous beasts have been created to be unique, exciting, and, above all, fun. Solar Ash is going to be released on PC, PS4, and PS5. 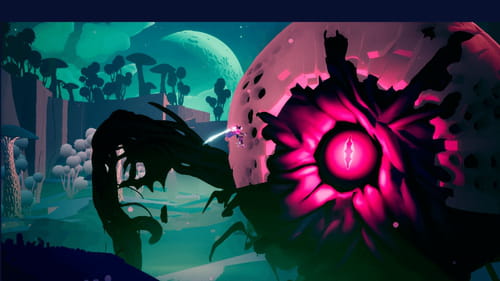 The first Solar Ash trailer was revealed on June 12, 2020, it reveals some details about the plot and showcases a few gameplay features:

The last Solar Ash gameplay trailer was revealed on February 25, 2021 during the Sony PlayStation's State of Play 2021 livestream, the universe is explained in more detail and overall gameplay features are presented:

Solar Ash is scheduled to be released on December 2, 2021 on all supported platforms.

Solar Ash is not free, the price is not available yet.

The game is rated Teen and is suitable for 13+, it contains blood and fantasy violence.

If you want to start the Heart Machine adventure from the beginning you must play to Hyper Light Drifter.

Solar Ash is available on PC through the Epic Store, and PS4/PS5.