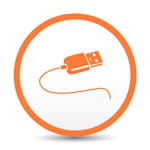 If you have to transfer large files from one PC to another, using a flash disk or burning a CD-ROM can seem like a waste of time. One good way to transfer these files quickly between two computers would be to use a USB-USB cable.

This article will teach you how to connect two PCs using a hardware USB cable. This will allow you to easily and quickly transfer files between the devices.

Connect Computers with a USB Cable

When it comes to choosing your cable, there are various USB-to-USB options on the market. We recommend selecting the bridged cable, which is also known as a USB networking cable. This cable has an electronic circuit at its center that facilitates the connection between two PCs. For high-speed use, use a USB 2.0 cable, which has a better transfer rate than a standard network connection.

The most common alternate is known as an A/A USB, which has two standard USB connectors at each end. However, this cable does not include the bridge chip, making it useless for the connection. As a matter of caution, A/A USB cables may burn the USB ports and the power supplies connected.

In order to do the transfer, you will need three main pieces of equipment: an Ethernet crossover cable, a null modem serial cable (or a parallel peripheral cable, if you don't have a null modem), as well as a special-purpose USB cable.

Creating an ethernet network will allow you to transfer data between more than two computers. Note that at least one of the computers must have an Ethernet adaptor — as long as the other computers have at least a USB port, you can perform the connection using a crossover cable.

The cable used to connect the two PCs together is called a USB networking cable. As mentioned above, this cable is distinguished by a tiny electronic circuit that is placed in the middle of the connection to allow the computers to send data to one another. Keep in mind that if you are using serial or parallel cables, you will not be able to transfer data between more than two computers. (If you're looking to transfer data between multiple computers, it's recommended you use a direct cable connection.)

USB 1.1 or USB 2.0 bridge chips can be used to enhance the speed of your transfer, though this would require an Ethernet network that works at 100 mps or more to make your transfers easier.

Both computers should be switched on and logged into the "Administrator" account. On the USB port computer, plug the USB bridge into the USB slot and the end bridge into the other computer.


You must now install the USB bridge cable driver software when you are asked to. Remember to install it as a link adapter or a network adapter.

Once installation is complete, you should be able to start the data transfers between the computers.

This document, titled « How To Connect Computers via USB », is available under the Creative Commons license. Any copy, reuse, or modification of the content should be sufficiently credited to CCM (ccm.net).
Next

How to connect two computers with a USB Cable

How to connect two computers with a USB Cable