What is a hub ? A hub is a hardware element for centralizing network traffic coming from multiple hosts, that also propagates the signal. It has a certain number of ports - enough ports to link machines to one another, usually 4, 8, 16 or 32. Its only goal is to recover binary data coming into a port and send it to all the other ports. As with a repeater, a hub operates on layer 1 of the OSI model. This is why it is sometimes called a multiport repeater. The hub connects several machines together, sometimes arranged in a star shape, which gives it its name, due to the fact that all communication coming from the machines on the network passes through it. . 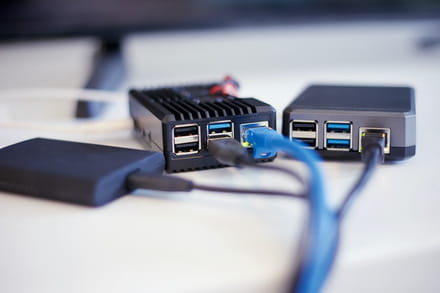 There are several categories of hubs.

Active hubs are connected to an electrical power source and are used to refresh the signal sent to the ports.

They simply send the signal to all the connected hosts, without amplifying it.

It is possible to connect several hubs together in order to centralize a larger number of machines. This is sometimes called a daisy chain. To do this, all you need to do is to connect the hubs using crossover cable. This kind of cable links the in/out ports on one end to those on the other.

Hubs generally have a special port hub called an uplink for connecting two hubs together using a patch cable. There are also hubs which can cross or uncross their ports automatically depending on whether they are connected to a host or to a hub.

If you want to connect multiple machines to your Internet connection, a hub is not enough. You'll either need to have a router or a switch, or to leave the computer connected directly as a gateway (it will stay on constantly for as long as the other computers on the network want to access the Internet.)

Related
This document, titled « Network equipment - The hub », is available under the Creative Commons license. Any copy, reuse, or modification of the content should be sufficiently credited to CCM (ccm.net).
Previous