Fall Guys is an incredibly fun game that has taken the world by storm! Read our complete Fall Guys Guide here.

Fall Guys: Ultimate Knockout is a video game, one of the biggest hits of 2020 and that is still priced by the community. Its simple, yet addictive gameplay is a breath of fresh air. If you want to know where to start with the game, you can check out our complete Fall Guys guide. In this article, we discuss some of the game’s key features, as well as some additional information.

Here are some of the main features of the Fall Guys game:

Fall Guys: Ultimate Knockout is a Battle Royale style game. The aim of the game is to get to the end of the round, filled with colorful and complex obstacle courses, without being eliminated. Each game has several rounds, beginning with 60 players. The winner is the last Fall Guy standing at the end of the final round.

The is free only to PS4 players that are also PS Plus members.

For the Fall Guys download, click on the green button on the top of the page - this will lead you to the official Steam page where you will be able to purchase the game.

As of January 2021, Fall Guys does not support cross-play, however, the studio head has revealed that he wants to bring Fall Guys to as many platforms as possible, and incorporate cross-play so people will be able to play together. 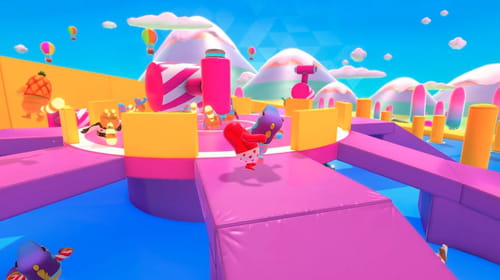 A Fall Guys mobile version is in development, however, for now, it is planned only for China and we will have to wait to see it in other countries.

Xbox announced that Fall Guys is officially coming to the Xbox Series X|S and Xbox One. It is not sure whether or not Fall Guys will be on the Xbox Game Pass, although it is a strong possibility. The original release date was given as Summer 2021, however this has been pushed back towards the end of the year.