What is FTP Protocol ? FTP (File Transfer Protocol) is, as its name indicates a protocol for transferring files. The implementation of FTP dates from 1971 when a file transfer system (described in RFC141) between MIT machines (Massachusetts Institute of Technology) was developed. Many RFC have since made improvements to the basic protocol, but the greatest innovations date from July 1973. The FTP protocol is currently defined by RFC 959. 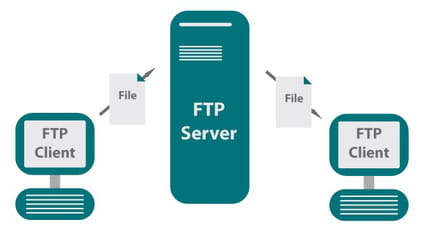 What is The Function of FTP protocol?

FTP protocol defines the way in which data must be transferred over a TCP/IP network.

The aim of FTP protocol is to:

FTP protocol falls within a client-server model, i.e. one machine sends orders (the client) and the other awaits requests to carry out actions (the server).

During an FTP connection, two transmission channels are open:

So, both the client and server have two processes allowing these two types of information to be managed:

It is important to note that since the control and data ports are separate channels, bold>it is possible to send commands from one machine and receive data on another</bold>. So, for example it is possible to transfer data between FTP servers by passing through a client to send control instructions and by transferring information between two server processes connected on the right port.

If the FTP command has a parameter, this is separated from the command by a space (<SP>).

There are three different types of FTP commands:

The FTP responses make it possible to ensure synchronization between the client and FTP server. So, at each command sent by the client, the server will potentially carry out an action and systematically send back a response.

The responses are made up of a 3 digit code indicating the way in which the command sent by the client has been processed. However, since this 3 digit code is hard to read for humans, it is accompanied by a text (Telnet character string separated from the numeric code by a space).

The response codes are made up of 3 numbers the meanings of which are as follows:

Related
This document, titled « FTP protocol (File Transfer Protocol) », is available under the Creative Commons license. Any copy, reuse, or modification of the content should be sufficiently credited to CCM (ccm.net).
Next