Adobe Audition. started as the simple sound editor called Cool Edit Pro. It has now evolved into a multi-track recording tool, which offers all the necessary tools expected from Adobe products.

Standard features for editing audio files are integrated such as cutting, pasting, cropping and combining audio files so as to create your song. Adobe Audition can produce a result worthy of a professional studio mixing with numbers of special effects such as reverb, multitap delay, 3D echo, equalizers, chorus, flanger and distortion. Being an audio editing software, Adobe Audition has been designed to be able to mix up to 128 tracks all of them with professional results. And of course, it also allows individual edition. For this latest version, the multi-track recording option is enabled. The burning feature is very interesting in the sense that through it, the software can edit music files up to 2GB in term of size. It is worth to note here that the program is equipped with a Blu-ray burning which makes the editing audio even better. Users are given the entire freedom to remove sound from a music track in a matter of clicks. Several effects are made available at users' disposal such as sound remover effect, stereo expander and pitch bender.

Adobe Audition is a fully-featured application for digital audio editing. It's easy to install with an intuitive interface. It supports more than 25 file formats. It is available in several languages. This shareware version expires after 30 days of use; you have to pay for a license after that. So far, it only is available in English. 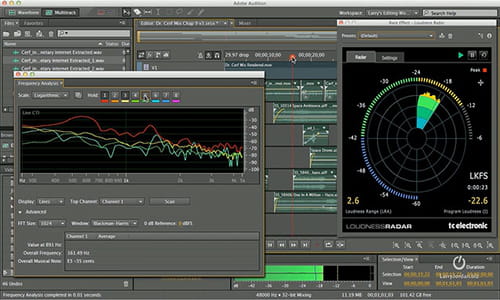