As simple as it is to use, an email relies on a more complicated set of operating procedures than that of the Web. For most users, its operation is transparent, which means that it is not necessary to understand how it works in order to be able to use it. The goal of this article is to help you to understand its basic principles, give you an idea of how to best configure your email clients, and inform you about the underlying mechanisms of spam. 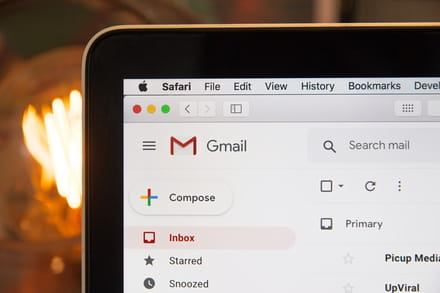 The use of an email is based around the use of electronic mailboxes. When an email is sent, the message is routed from server to server, all the way to the recipient's email server. More specifically, the message is sent to the mail server tasked with transporting emails (called the MTA, for Mail Transport Agent) to the recipient's MTA. On the Internet, MTAs communicate with one another using the protocol SMTP, and so are logically called SMTP servers (or sometimes outgoing mail servers).

The recipient's MTA then delivers the email to the incoming mail server (called the MDA, for Mail Delivery Agent) that stores the email as it waits for the user to accept it. There are two main protocols used for retrieving email on an MDA:

For this reason, incoming mail servers are called POP servers or IMAP servers, depending on which protocol is used: 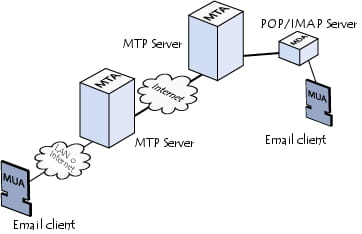 To use a real-world analogy, MTAs act as the post office (the sorting area and mail carrier) that handle message transportation, while MDAs act as mailboxes that store messages (as much as their volume will allow) until the recipients check the box. This means that it is not necessary for recipients to be connected in order to receive an email.

To keep everyone from checking other users' emails, MDA is protected by a user name called a login and by a password.

Retrieving mail is done using a software program called an MUA (Mail User Agent). When the MUA is installed on the user's system, it is called an email client (such as Mozilla Thunderbird, Microsoft Outlook, Eudora Mail, Incredimail or Lotus Notes). When it is a web interface used for interacting with the incoming mail server, it is called webmail.

By default, it is not necessary to authenticate oneself to send an email, which means that it is very easy to falsify one's address when sending it. For this reason, nearly all Internet service providers lock down their SMTP servers so that only their subscribers can use them, or more precisely, only machines whose IP address belongs to the ISP's domain.

When an organization's email server is improperly configured and allows third-party users on any network to send emails, this is called an open relay. Open relays are generally used by spammers, as using them hides the true origins of their messages. As a result, many ISPs keep an up-to-date blacklist of open relays to keep subscribers from receiving messages from such servers.

Related
This document, titled « How Email Works (MTA, MDA, MUA) », is available under the Creative Commons license. Any copy, reuse, or modification of the content should be sufficiently credited to CCM (ccm.net).
Previous