The generic term network refers to a group of entities (for example. objects, people, etc.) that are connected to one another. A network, therefore, allows material or immaterial elements to be circulated among all of these entities, based on well-defined rules. Depending on what kind of entity is involved, the term used will differ. 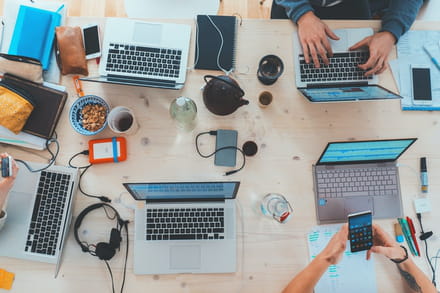 What Is a Network: Computer Network Definition

A computer network is a group of computers linked to one another with physical lines, exchanging information as digital data (binary values, i.e. values encoded as a signal that can represent either 0 or 1). There isn't just one kind of network, as historically, there have been different kinds of computers, using various different languages to communicate. The need for multiple types of networks also arises from the heterogeneity of the physical transmission media that link them together, whether that means the data is transferred the same way (such as by electrical pulses, light beams, or electromagnetic waves) or uses the same kind of physical medium (such as coaxial cable, twisted pairs, or fiber-optic lines).

How the Networking Sections Are Organized

The networking section of CCM.net is divided into several chapters.

The present section describes what a network is and the different types of networks that exist.

The data transmission section is about how each data is transmitted in each type of medium.

The network equipment section describes the different kinds of equipment that are used to connect computers to one another.

Why Networks Are Important

A computer is a machine used to manipulate data. Humans, being a communicative species, quickly understood why it would be useful to link computers to each other in order to exchange information.

A computer network can serve several distinct purposes (whether it is for a business or for individual use):

Networks are also used for standardizing applications. The term groupware is generally used to refer to tools that let multiple people work over a network. For example, email and group scheduling can be used to communicate more quickly and efficiently. Here's a glimpse of the advantages that such systems have: lower costs, due to the sharing of data and of peripherals; standardizing applications; providing timely access to data; and more efficient communication and organization.

Similarities Between Types of Networks

The different types of networks generally have the following points in common:

There are usually said to be two types of networks: peer-to-peer networks and Client/Server that are networks organized around servers. These two types of networks have different capabilities. The choice of the network to install depends on the following criteria: size of the business, level of security required, type of activity, skills of the administrators available, volume of traffic over the network, needs of the network's users, and budget set aside for operating the network (not just purchasing it, but also upkeep and maintenance).

Related
This document, titled « The Concept of Networks », is available under the Creative Commons license. Any copy, reuse, or modification of the content should be sufficiently credited to CCM (ccm.net).
Previous

Why Is Mother's Maiden Name Still Used as a Security Question?

Why Is Mother's Maiden Name Still Used as a Security Question?
LAN