The updates just keep improving this game. Excellent and fun to play!

Bloons TD 5 is a tower defense strategy game for Android and Apple devices. It was developed by Ninja Kiwi and released in December 2011 but over a decade later, it is still ranked #6 in Action on the App store. In the game, players have to stop Bloons from entering the tower using diverse tools and they lose lives when Bloons reach the end of a path. In this article, we discuss some of the game’s main features, as well as some additional information. 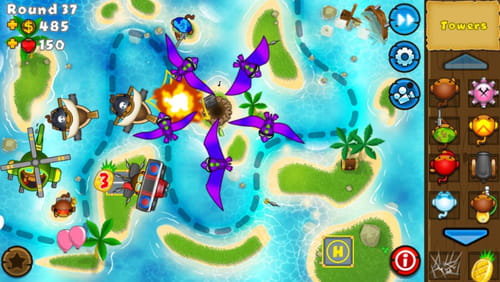 It seems that the app has no history of security issues or abusive data collecting. As always, we recommend reading the official Privacy policy in order to take note of the way Bloons TD 5 uses your data. In general, the app seems as safe as any other mobile game.

In order to run this game, you need iOS or iPadOS 9.3 and later or, for the Android version Android 4.3 and up.

You can also check the next version, Bloons TD 6.
Image: Google Play