No matter if you had the chance to play those 3 games in the past years or if you already know every place of the 3 islands, you should really give them a chance and enjoy the brand new experience with new content, improved gameplay, and graphics.

Grand Theft Auto The Trilogy - The Definitive Edition is finally announced by Rockstar Games after a lot of leaks and rumors. The trilogy will include GTA 3, GTA Vice City, and GTA San Andreas, which are considered by a lot of players as the best titles of the series. The games will be released on PC, Xbox Series X, Xbox Series S, Xbox One, PS5, PS4, Nintendo Switch, Android, and iOS. Let’s take a look at how Rockstar has remastered the emblematic games. 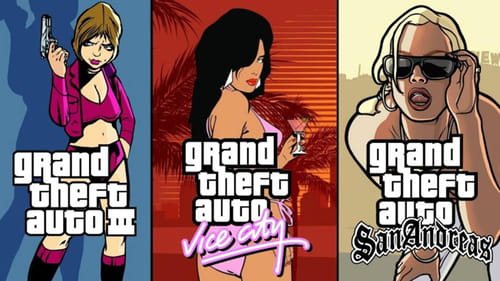 What will the original GTA 3, GTA Vice City, and GTA San Andreas become ?

Rockstar Games announced the three online versions will be removed from the online stores next week.

When will Grand Theft Auto The Trilogy be released ?

The titles will be digitally released on November 11, 2021 on PC and consoles, If you're getting the physical-only PS4 or Xbox One editions, you will have to wait until December 6, 2021, just under a month later. Mobile versions will be released from the first semester of 2022. The three games will be sold individually and are already on the Rockstar Launcher ready to be pre-ordered soon. By purchasing Grand Theft Auto: The Trilogy by January 5, 2022, buyers will receive a $10 rebate on their next purchase through the Rockstar Games Launcher or Rockstar Web Stores on eligible products of $15 or more (exchange rates apply). The rebate expires on January 16, 2022.

Grand Theft Auto The Trilogy is not free, the price has not been revealed yet.

If you like the vast experience of open world games you should really try the excellent Red Dead Redemption 2.

The following system requirements may possibly change in the future.