If you're an Android user, you might have realised that you can split your screen. This comes in handy when handling simultaneous functions, for example checking your email while using WhatsApp or watching a video while checking out your Twitter feed. Here we'll explain how to divide your screen on Android, luckily it's relatively easy to do! 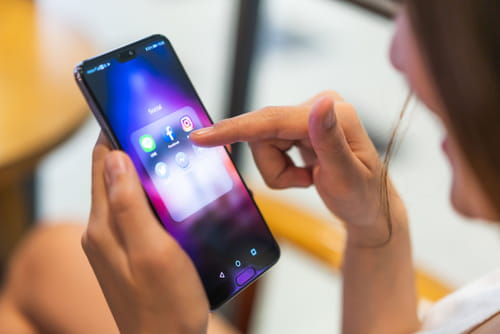 Split Your Screen on Android Devices

Screen splitting on Android has been available since 2016, with the release of Android Nougat (version 7.0). However over the years, this feature has been enhanced with several updates. Here we explain two easy ways for you to split your screen.

N.B.: Keep in mind that not all Android apps are compatible with screen splitting.

To get started, open the apps you want to view in split screen. Then press the application selector button. On most Android devices, this is located at the bottom of the screen and it's typically square shaped:

Next, select the app you want to view in split screen mode, and then press and hold it. Three options will appear; select the second option for split screen:

Choose the second app you want to view and it will appear at the bottom of the screen:

Another easy way to split the screen on some Android devices is to use the button to switch applications. While on your device's home or while using an app, press and hold the application switch icon (located at the bottom of your phone), as if you wanted to jump to an open app in background. Then choose another app you want to see and you'll access split screen mode.

Related
This document, titled « How To Split The Screen on Android Devices », is available under the Creative Commons license. Any copy, reuse, or modification of the content should be sufficiently credited to CCM (ccm.net).
Previous

How to Solve the Error ‘Android is starting, optimising application 1 of 1'

Use an Android Device as a Graphics Tablet

How to Solve the Error ‘Android is starting, optimising application 1 of 1'
Use an Android Device as a Graphics Tablet