Latest update on February 15, 2012 at 08:23 AM by Paul Berentzen.
It is very dangerous if your laptop / computer regularly faces the problem of overheating. This needs to be tackled immediately as it can compromise your safety. In the case of HP DV6000/DV9000/DV2000 computers, this type of problem sometimes arises.HP laptops are affected with problems to do with powering on and constantly shutting off. One of the reasons for overheating issue is a faulty chip on the graphics card. Reflow of the graphics chip can solve this crisis but this process involves an expert procedure that needs to be done with the utmost care. 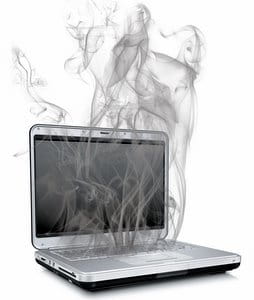 
There are several symptoms that cold indicate a problem with your graphics card:

These issues can be fixed by reflowing the graphics chip.

For the next step of the process you will require a heat gun.

You will also need some coins to place on top of the graphics chip - a stack of 10 should do. This ensures the heat transfer is slower and more even as well as applying the necessary pressure on top of the chip to press it down.

It is worth noting that Hewlett Packard sometimes uses red epoxy around the edge of the chip to secure it. If there is a lot of it, you may need to use a razor to scrape off some of the epoxy. Be careful doing this as you can easily damage valuable computer components.


Thanks to LaptopExpert for this tip on the forum.

This document, titled « HOW TO FIX YOUR DV6000/DV9000/DV2000 overheating issues? », is available under the Creative Commons license. Any copy, reuse, or modification of the content should be sufficiently credited to CCM (ccm.net).
Previous