The IEEE 802.11 specification (ISO/IEC 8802-11) is an international standard describing the characteristics of a wireless local area network (WLAN). The name Wi-Fi (stands for Wireless Fidelity, sometimes incorrectly shortened to WiFi) corresponds to the name of the certification given by the Wi-Fi Alliance, formerly WECA (Wireless Ethernet Compatibility Alliance) - the group that ensures compatibility between hardware devices that use the 802.11 standard. Today, due to misuse of the terms (and for marketing purposes), the name of the standard is often confused with the name of the certification. A Wi-Fi network, in reality, is a network that complies with the 802.11 standard. 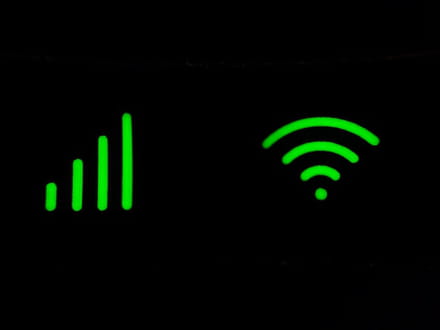 Hardware devices certified by the Wi-Fi Alliance are allowed to use this logo:

With Wi-Fi, it is possible to create high-speed wireless local area networks, if the computer to be connected is not too far from the access point. In practice, Wi-Fi can be used to provide high-speed connections (11 Mbps or greater) to laptop computers, desktop computers, PDAs and any other devices located within a radius of several dozen metres (around 39ft.) indoors (in general 20m-50m/60ft.-164ft. away) or within several hundred metres/ft. outdoors.

Wi-Fi providers are starting to blanket areas that have a high concentration of users (like train stations, airports, and hotels) with wireless networks. These access areas are called <bold>hot spots.

The 802.11 standard reserves the low levels of the OSI model for a wireless connection that uses electromagnetic waves, that is:

The IEEE 802.11 standard is actually only the earliest standard, allowing 1-2 Mbps of bandwidth. Amendments have to be made to the original standard in order to optimize bandwidth (these include the 802.11a, 802.11b and 802.11g standards, which are called 802.11 physical standards) or to better specify components in order to ensure improved security or compatibility. This table shows the various amendments to the 802.11 standard and their significance:

It is also useful to note the existence of a standard called "802.11b+". This is a proprietary standard with improvements in data flow. However, this standard also suffers from gaps in interoperability due to not being an IEEE standard.

The 802.11a, 802.11b and 802.11g standards, called physical standards are amendments to the 802.11 standard and offer different modes of operation that allows them to reach different data transfer speeds depending on their range.

The 802.11 standard has a maximum theoretical data flow of 54 Mbps, five times that of 802.11b, but at a range of only about thirty metres/ninety-eight feet. The 802.11a standard relies on a technology called OFDM (Orthogonal Frequency Division Multiplexing). It broadcasts in the 5 GHz frequency range and uses 8 non-overlapping channels.

The 802.11g standard allows for a maximum data transfer speed of 54 Mbps at ranges comparable to those of the 802.11b standard. What's more, as the 802.11g standard uses the 2.4GHz frequency range with OFDM coding, this standard is compatible with 802.11b devices, with the exception of some older devices.

Related
This document, titled « Introduction to Wi-Fi (802.11 or WiFi) », is available under the Creative Commons license. Any copy, reuse, or modification of the content should be sufficiently credited to CCM (ccm.net).
Previous