Even though hard drives can be very small, they still contain millions of bits and therefore need to be organized so that information can be located. This is the purpose of the file system. The surface of each cylinder, which is originally uniform, is divided during formatting (by divided we mean of course that the surface particles are magnetised...) into little parcels that can be more easily located.

The purpose of low-level formatting is to divide the disk surface into basic elements:

Remember that a hard drive consists of several circular platters rotating around an axis and covered on either side by a magnetic oxide which, since it is polarised, can be used to store data.

The tracks are the concentric areas written on both sides of a platter. 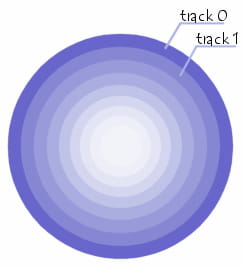 Finally, these tracks are divided into pieces called sectors.

There are millions of tracks and each has around 60 to 120 sectors.

A cylinder refers to all the data located on the same track of different platters (i.e. vertically on top of each other) as this forms a "cylinder" of data in space. 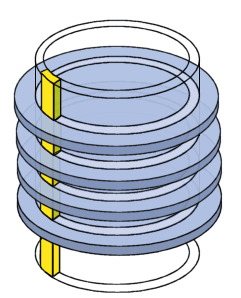 Physical formatting therefore consists in organizing the surface of each platter into entities called trackers and sectors, by polarising the disk areas using the write heads. Tracks are numbered starting from 0, then the heads polarise concentrically the surface of the platters. When the head goes from one track to the next, it leaves a gap. Each track is itself organized into sectors (numbered starting from 1) and separated by gaps. Each of these sectors starts with an area reserved for system information called a prefix and ends with an area called a suffix
The purpose of low-level formatting is therefore to prepare the disk surface to receive data (and therefore does not depend on the operating system) and to mark "defective sectors" using tests performed by the manufacturer.

When you buy a hard drive, it has already undergone low-level formatting. SO YOU DO NOT NEED TO PERFORM LOW-LEVEL FORMATTING!

During the formatting, check tests (algorithms allowing the validity of sectors to be tested using checksums) are performed and each time a sector is considered defective, the (invalid) checksum is written in the prefix. It can no longer be used thereafter and is said to be "marked defective".

When the disk reads the data, it sends a value that depends on the content of the sent packet, and which is initially stored with the data. The system calculates this value based on the data received, and then it compares it with the one that is stored with the data. If these two values are different, the data are no longer valid and there is probably a problem with the disk surface.
The cyclic redundancy check (CRC), is based on the same principle to check the integrity of a file.

Analysis utilities such as scandisk or chkdsk operate differently:
they write data on sectors considered to be valid, and then read them and compare them. If they are the same, the utility goes on to the next sector, otherwise it marks the sector as defective.

Logical formatting occurs after the low-level formatting. It creates a file system on the disks that will allow an operating system (DOS, Windows 95, Linux, OS/2, Windows NT, ...) to use the disk space to store and access files.

Fortunately, there is a solution to this problem which is to create partitions. Each of the partitions can effectively have its own file system, and you can therefore install different types of operating systems.

Related
This document, titled « Formatting - Formatting a hard drive », is available under the Creative Commons license. Any copy, reuse, or modification of the content should be sufficiently credited to CCM (ccm.net).
Previous