The 2021 edition of E3 is over and provided us with some great announcements and updates, however, The Elder Scrolls 6 wasn’t one of them. Initially announced in 2018, we haven’t heard much about it since then - and a lot has passed. In the present article, we discuss everything we know about the future The Elder Scrolls VI: new, rumors, and predictions. So if you are a fan of the Elder Scrolls franchise, then read on - we have plenty to talk about!

What platforms The Elder Scrolls 6 will be available on? To answer this question, we need some context.

Bethesda, the studio behind the Elder Scrolls franchise, has been acquired by Microsoft back in March 2021. On this occasion, Phil Spencer (current executive vice-president of Gaming at Microsoft) stated that the partnership is “about delivering great exclusive games for you that ship on platforms where Game Pass exists" - or, in other words, not PS5. Spencer also added, “Obviously I can’t sit here and say every Bethesda game is exclusive, because we know that’s not true” and specified: “We have games that exist on other platforms, and we’re gonna go support those games on the platforms they’re on. There are communities of players and we love those communities and we’ll continue to invest in them.”. On the other hand, Todd Howard (lead developer of the Elder Scrolls series) said that it is “hard to imagine” the game coming only to Xbox/PC.

According to Jim Ryan (CEO of PlayStation) whether the game will come on PlayStation “That’s a decision that is out of our hands.”

In conclusion, it is uncertain but not impossible that the Elder Scrolls 6 will be available on PS5 in addition to Xbox Series X|S and PC.

The good news is that there is an official announcement trailer for the game - the bad news is that it doesn’t reveal much. Please note that the video linked below is the only official and real trailer up to date.

A leaked 10-seconds footage from a first-person view was posted on reddit (leaked from 4chan). However, it is hard to tell if it is a map testing of the game or anything to do with Elder Scrolls 6 in general. We recommend avoiding putting much hype into it (also, Redfall is a new FPS and it's unrelated to The Elder Scrolls 6).

Two major regions have been rumored on the Internet: Black Marsh and Valenwood. While there is no solid argument in favor of the first one, in an internal Bethesda memo in 2014, employees were warned against using “Fallout: Nuka World, Elder Scrolls VI or Project Greenheart.”. And Greenheart is a city in Valenwood. Well, Fallout: Nuka World turned out, indeed, to be a DLC for Fallout 4, so why not Valenwood?

Another rumored region is Hammerfell - there is a Twitter post on the official account of the Elder Scrolls where an unmapped region of Hammerfell can be seen. 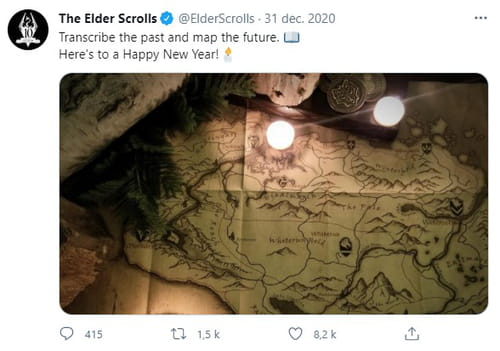 In addition to that, even though there was nothing official regarding the game during the 2021 edition of E3, there was another announcement that got fans hyped about the Elder Scrolls 6: Starfield. During the official teaser trailer of Starfield, reddit user Huhwtfbleh spotted a “scuff” that looks a lot like a doodle of a map - a doodle of Iliac Bay. Could this be an easter egg for TES6?

Shirley Curry, also known as Skyrim Grandma, is a 85-years old YouTuber who became famous for playing video games. She will appear as a non-playable character (NPC) in The Elder Scrolls 6 - she will also be available to play in Skyrim through a mod.

Creation Engine got an overhaul - Todd Howard spoke about it and said "it's led to our largest engine overhaul since Oblivion, with all new technologies powering our first new IP in 25 years, Starfield, as well as The Elder Scrolls 6."

In addition to that, photogrammetry technology will be used. This implies scanning real-life objects and environments and then converting them into a 3D render that is full of details.
Images: Twitter

Related
This document, titled « The Elder Scrolls 6: release date, location, trailer & rumours », is available under the Creative Commons license. Any copy, reuse, or modification of the content should be sufficiently credited to CCM (ccm.net).
Previous