When it comes to selecting a new television, the number of options available can make the decision almost overwhelming. LCD and LED televisions are among the most common models on the market, and while they offer very similar viewing experiences, there are subtle differences that you should take into account before making your purchase. This article will provide you with the information you need to make an informed decision and will also give you some tips on how to increase the longevity of your television so that you can get the most out of your investment. 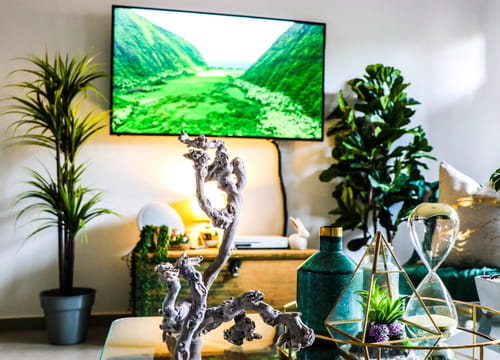 Here is a quick rundown of the three most common screens found in today's market: LCD, LED, and Plasma.

What is an LCD Screen?

LCD, or liquid crystal display, televisions utilize a flat-panel display that uses the light-modulating properties of liquid crystals to either block light, or allow it to pass. These crystals (commonly referred to as pixels) each reproduce a tiny piece of an image and together, render a sharp image whose colors and transparency can be changed by either reducing or increasing electrical current.

There are three issues that are commonly experienced with LCD models. The first is the response time of the screen. LCD devices utilize a small "processor" that coordinates pixel synchronization, and over time, the processor may become slower. A slowed processor may result in sudden streaks, or color changes and can only be fixed through recalibrating your television.

LCD models are also more prone to breakage. Despite the screens often being advertised as "tough" in comparison to plasma televisions, LCD screens are not indestructible. If and when pixels become trapped between layers of the screen, they form black spots on your screen, which are impossible to remove.

Finally, LCD TVs are known to be excessively bright, though over time, exposition levels may change.

In contrast, LED screens experience none of, or very few of, these issues.

What is an LED Screen?

LED, or light-emitting diode screens utilize the same technology as their LCD counterparts, but instead of being illuminated by florescent bulbs, they are lit by a series of light emitting diodes. These bulbs are much smaller, and much more efficient than florescent bulbs, which means that for the same image quality, LED screens are often much more narrow than LCD screens.

The LED category can be broken up into two sub-categories: Direct LED and Edge-lit LED. Direct LED screens are lit by light-emitting diodes, found directly behind the screen. This allows for brightness and darkness to be displayed more effectively on screen. Edge-lit LEDs are lit by small diodes around the edge of a screen, and are often lighter in weight then Direct LED models.

What is a Plasma Screen?

In a plasma screen, the pixel structure consists of encapsulated gas (phosphorus), trapped between two glass plates. By applying an electrical current the gas will undergo some chemical reaction, resulting in the creation of the "plasma". Plasma screens emit an ultraviolet light which changes color upon hitting the phosphorus layer of the capsule.

Plasma screens are arguably superior to LCD and LED screens in regards to image quality, but there are three major drawbacks that you should be aware of before making your purchase. First of all, plasma screens are prone to significant loss of color as they age. Over time, the chemical reactions needed to create plasma gradually slow down, resulting in a change in the radiation emitted by gases (especially xenon). This will result in a loss of color. In a similar fashion, plasma screens are also prone to loss of brightness.

Perhaps the biggest drawback to plasma models is their fragility. Plasma screens are much more fragile than LCD and LED models, and if damaged, may result in the escape of the screen's encapsulated gas.

According to manufacturers, a television has a lifespan of approximately 40,000 to 90,000 hours (continuous use). This translates to roughly between four and ten years of active use. This estimation is contingent on a number of factors, and will vary according to television model, brand, actual use, as well as its location and environment.

Ready to make your purchase? When it comes to selecting the brand of your television, there are many to choose from, though brands such as LG, Samsung, and Sony are probably among the most reputable in the market due to their use of high quality, reliable components.

Please note that products of this type rarely last more than a few years after the warranty.

Caring for Your Television

When it comes to taking care of your television, the location and environment in which it's placed is very important and may effect the television's lifespan.

You should also avoid placing your television too close to the ground, as dust particles may damage your screen.

Related
This document, titled « A Television Buying Guide: LCD, LED, or Plasma? », is available under the Creative Commons license. Any copy, reuse, or modification of the content should be sufficiently credited to CCM (ccm.net).
Previous

Connecting 2 pc's with a crossover cable