The highly anticipated launch of Cyberpunk 2077 has not gone according to plan, which is quite fitting for 2020. On consoles, the game has an over abundance of bugs, and poorer performance than publicized, that seemingly no amount of Keanu Reeves can make up for. Many gamers are understandably dissatisfied with the current state of the game on console, and looking for Cyberpunk 2077 refunds. If you want to get your money back, this article will show you how to get a refund for Cyberpunk 2077. 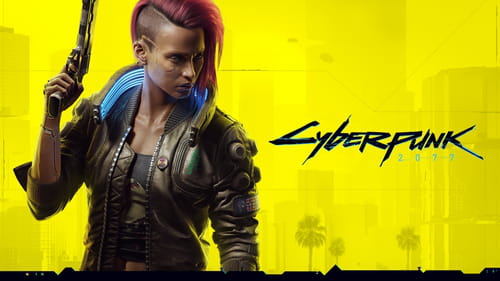 Fortunately, CD Projekt Red have a good track record for fixing bugs, generally improving, and offering continued support for their games after launch, as per the Witcher 3. However offering patches and support to a game after launch is no justification for releasing an unfinished game, that a number of review outlets have called unplayable on last-gen. With no actual Xbox Series S/X or PS5 version of Cyberpunk 2077 currently released (however, you can play on both consoles thanks to backwards compatibility mode), and the continued shortage of next-gen consoles, the majority of gamers will be on the Xbox One and PS4 consoles. So, having an unplayable game on these consoles is inexcusable. Gamers should not need to wait for the game to be fixed, after they have already purchased it, for them to enjoy it.

CD Projekt Red released a statement on the 14th December apologizing firstly for not showing any footage of the game on consoles before launch allowing gamers to make a considered purchase, and then ultimately for the state of the game on “last-gen” consoles. They then went on to propose refunds, asking gamers to use the PSN and Xbox refund systems for digital purchases, and from the point of sale for boxed versions. There is also a designated support email from CD Projekt Red if you are unable to get a reinmbursement through these channels: helpmerefund@cdprojektred.com 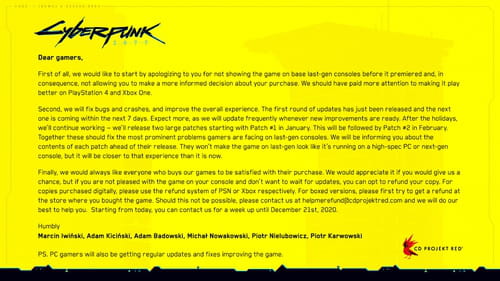 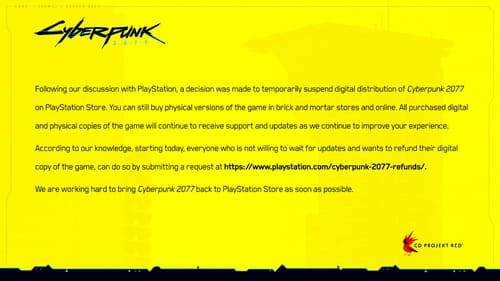 To redeem your refund, you need to Sign In at the bottom of this page, and follow the instructions. This is only valid if you purchased your game directly from the PlayStation Store.

If you purchased Cyberpunk digitally on the Xbox One, Xbox Series X/S, you can request a digital refund on the Xbox Refund Page. You will need to sign in to begin filling out the refund form. It is important to note:

If you bought Cyberpunk 2077 for your PC on the Steam Store, you can request a refund for Cyberpunk 2077 here. Steam’s refund policy states that refund requests must be made within 14 days on buying the game, and that you’ve played fewer than 2 hours. That said, Steam will consider refund requests outside of that, and with the large number of users requesting Cyberpunk refunds, it is foreseeable that concessions will be made.

If you purchased a hard copy of the game in store, then the refund policy will depend on the retailer, and you should contact them directly. Below are a few examples.

The Amazon Return Policy allows you to return a game within 30 days of purchase for a full refund (if it’s in its original unopened packaging). If the game has been opened, you can still return it, however you will incur a “restocking fee”.

GameStop’s returns policy allows you to return a game within 30 days for a full refund, if the game is still in its original packaging. If it has been opened, then you have 7 days to return it, either in store or online.

Considering the precedent that Sony has set by removing the game from the PlayStation Store, it is likely that the refund situation will continue to develop over the coming weeks. Stay tuned for any more updates.
Photo: Cyberpunk

Related
This document, titled « Cyberpunk 2077 Refunds », is available under the Creative Commons license. Any copy, reuse, or modification of the content should be sufficiently credited to CCM (ccm.net).
Next