WhatsApp is the most popular instant messaging application in the world and is both used for business and personal exchanges. With it you can send and receive text and audio messages with contacts or groups, besides sharing photos, videos, documents, emojis and stickers. The conventional version of WhatsApp, available for Android and iOS, has already been downloaded by billions of people around the world. Besides the conventional version, the instant message app has three other official versions and dozens of more mods, which offer additional features. 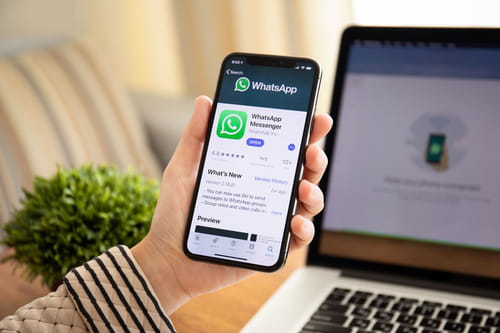 Officially, there are three other ways to use WhatsApp features - Beta, Business and Web versions. From the application's source code, an endless number of mods have also been created, which add functionality to the original software and attract many users. In this article, learn about each of the existing WhatsApp MOD types.

Like every program in beta mode, WhatsApp Beta is a trial version of the original application. In general, beta versions are not meant to be available for the general public, but the goal of developers with this mode is to allow new features to be tested and evaluated by thousands of people, thus to be able to find flaws and fix them quickly.

The opportunity to test first hand the new features that, within a few months, will be available to billions of people is so attractive that WhatsApp is no longer accepting users for the Beta version. The only thing you can do is use software like Beta Maniac to monitor the opening of new jobs.

If Beta is for those technology fans, WhatsApp Business is the right option for users who use WhatsApp as a work tool to interact with customers. Business has all the features of the conventional version of the app and additional features aimed especially for those who have a business.

The app allows the creation of a business profile, where it will be possible to display detailed information of your company, such as address, contact email and even a small catalog and a answering system. This account can be registered with a landline phone and the user can configure automatic greeting and absence messages to not leave potential customers unanswered for a long time.

WhatsApp Web is not an application, but the desktop version of the instant messaging app. Before a software had to be downloaded, today the Web is an online service where you just need to read a QR code provided by your cell phone to have your messages synchronized directly on your desktop either for Chrome or MAC. The tool is especially useful for working time, avoiding you having to pick up the mobile to check and answer messages.

In the beginning, WhatsApp Web was quite simple, being basically possible to read and send text messages. Now, however, this version is almost as complete as the smartphone app. You can send audio (if you have a microphone), pictures and documents in different formats. Soon the audio and video call function will be integrated.

The three versions above are the only official WhatsApp versions. However, you certainly know many others available on the internet. Among them we can mention some very popular ones like GBWhatsApp, WhatsApp Plus, YoWhatsApp and WhatsApp Aero. Following you can read the advantages and disadvantages of using one of these mods.

The term mods comes from modifications. Thus, these programs are nothing more than applications that offer WhatsApp, that is, the same source code, with some changes and additional features. This is the great advantage of these apps.

Each one of them has its own features, but in general they allow complete customization of the interface and some useful features such as sending documents of any size and the possibility of having more than one account registered in the application.

What are the risks of using a mod

The risks are not small. Like any APK application, when not in official stores like Play Store and App Store, WhatsApp mods can only be downloaded if you authorize the download from unknown sources, giving access to your system. This way, you won't have the security check of malwares like in the official stores, generating the possibility of infecting your phone or desktop.

Unlike the original WhatsApp, these apps do not necessarily guarantee the encryption of your conversations. Thus, there is a risk that they are stored on servers, invading your privacy. Finally, WhatsApp does not recognize these versions and there is a possibility that you will be banned from the platform for using a mod.

Related
This document, titled « How Many Types of WhatsApp are there? », is available under the Creative Commons license. Any copy, reuse, or modification of the content should be sufficiently credited to CCM (ccm.net).
Previous

How to send large files with WhatsApp

How and Why to Use Signal? Fully Secure Messaging App

How to send large files with WhatsApp
How and Why to Use Signal? Fully Secure Messaging App