Signal is a messaging service app that launched in 2014, and it's downloads have seen a boom in recent weeks following the announcement of WhatsApp’s new user data policy, which requires users to accept and share information with Facebook and partner companies. Signal however, works in the opposite way. Its priority is to ensure the privacy of users' conversations with encrypted messages, and as a result, millions of people downloaded the app in the last few days. In this article, find out how and why to use Signal as your new messaging services app.

In a simple word; privacy. Signal is an application developed by the same creators of the end-to-end encryption technology used by WhatsApp in recent years except Signal usage is different. All content sent in text or voice conversations is fully encrypted and neither the platform nor any other third party is able to view or store your data. That's why Signal's advertising is based on prioritizing the safety of users, who are free to share and write whatever they want without anyone monitoring or gathering their information.

Why Are People Downloading Signal?

The main poster boy for Signal in recent days was Elon Musk, CEO of Tesla and recently named the richest man in the world. On January 7th, the entrepreneur Tweeted a message on his account that read 'Use Signal'. Musk's publication, which later revealed he had already made donations to the non-profit organization responsible for the application, was a response to the controversy involving the new WhatsApp data policy.

The terms of WhatsApp's privacy policy, which must be accepted by anyone who wants to continue using the application, were evaluated by internet security experts as a violation of users' data privacy, by allowing the conversations data to be shared with Facebook and other companies.

This combination of factors made the application available for Android users since November 2015, to have an exponential growth in the Play Store, having already surpassed the mark of 10 million downloads.

How To Set Up Signal?

To set up Signal is as simple as doing it on WhatsApp. To begin, download and install Signal on your Android or iOS device. When opening the app for the first time, tap Continue after the introduction and then in the window that appears to confirm the granting of the access permissions and notifications. In the sequence, enter your phone number and country code. Confirm on Next: 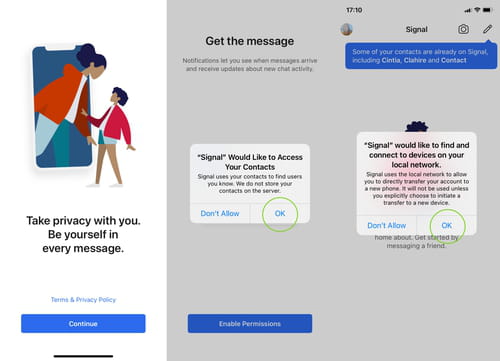 A six digit code will then be sent by SMS to your cell phone to confirm the account creation in the application. You can also choose to receive a call with the code. Then, to complete the process, you will need to create a four-digit PIN that will ensure that only you can have access to the app, even if your chip is cloned or something happens to your phone: 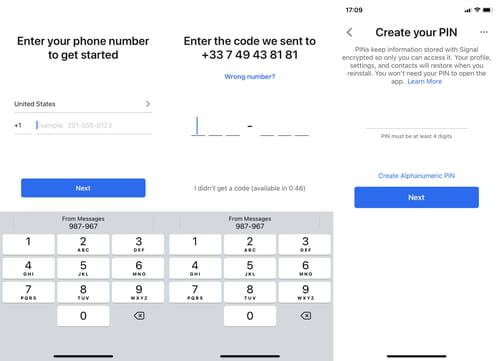 Now, to start a conversation with a contact, touch the pencil icon in the lower right corner of the screen, your list of contacts will appear on Signal. Just select who will receive the message and send it. From there, the procedure is very similar to WhatsApp. The conversation will appear on the home screen of the app and you will receive notifications whenever there are new messages.

The app is constantly being updated and recently the option of voice or group video calls has been added. The app allows to send images, audio files and documents in the conversations as well as creating groups. Signal also has a dark mode.

How to Invite Friends to Signal?

Following the success after the changes of WhatsApps, Over 500 million people have downloaded the Signal app, you can invite friends to download the application and ensure secure and encrypted messages between you. On the initial screen, touch the three dots icon and then Invite friends: 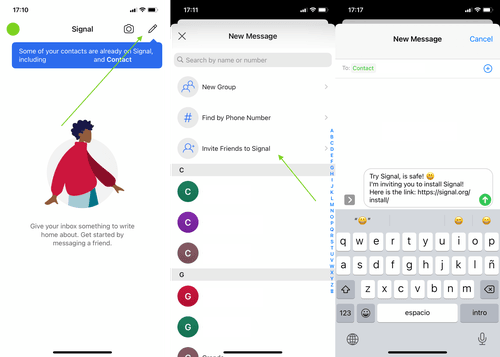 Then type the message to be sent (or maintain the default) and select Share with contacts. In this mode, the invitation is sent by SMS and is associated with your phone contact list. You can also touch Choose how to share and send by WhatsApp, Messenger, Instagram Direct, email, among others.

How to Move WhatsApp Groups to Signal

Because they are rival applications, there is no direct integration between WhatsApp and Signal. So, the best you can do is to send a link to the new group in Signal so that your friends can access it. To do so, open Signal, touch the three-point icon at the top right and then New Group. Select at least one participant, name the group and touch Create: 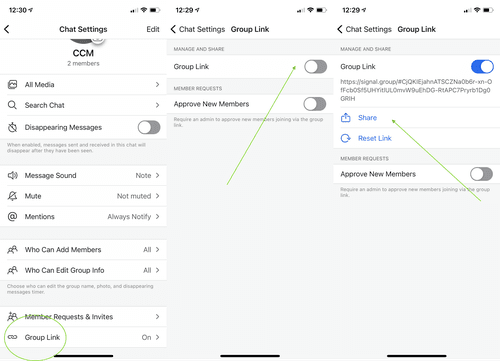 With the group created, open it and go to the three-point icon, select Group Settings, and tap on Group Link and share it to any of your WhatsApp groups.

Related
This document, titled « How and Why to Use Signal? Fully Secure Messaging App », is available under the Creative Commons license. Any copy, reuse, or modification of the content should be sufficiently credited to CCM (ccm.net).
Previous

How to send large files with WhatsApp

How to Use Signal on Desktop?

How to send large files with WhatsApp
How to Use Signal on Desktop?