Mozilla Firefox is safe, fast, easy to navigate. With its regular updates, the developers try to give the best experience to its users.

Mozilla Firefox is a web browser that offers users ease of use and security. It is designed to support HTML5, Javascript, and WebGL. It focuses a lot on user preferences, saving frequently-visited sites, and keeping track of sites that users favorite during browsing. It also saves browsing sessions so that when users return to their browsers after having quit them, Firefox offers to restore their most recent sessions. This download is for Firefox for Mac, and Firefox for Windows.

Firefox stands out from other browsers by its focus on "more speed, more privacy, more freedom." The browser uses less memory than competitors and goes further to protect user data. Firefox promotes a platform where users feel confident that their internet activity is protected.

In the latest Firefox update, Mozilla added a picture-in-picture mode, allowing users to multitask. They also added a Dark Mode for users that prefer a darker interface.

Can I install Firefox on My Chromebook

Note: This information was from the Mozilla Support Page.

How Do I Enable Adblock On Firefox

How To Manage Firefox Bookmarks

From the Firefox Help Center, you can manage Firefox bookmarks easily:

For more information on managing Firefox bookmarks, refer to the Firefox website. 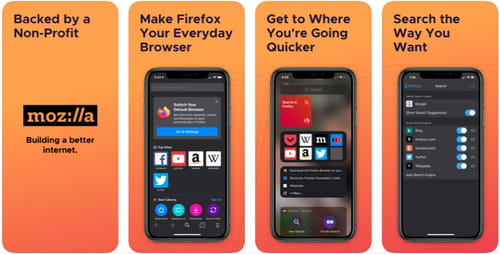